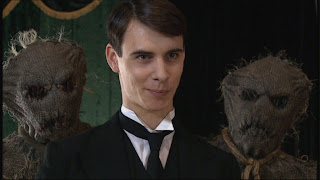 Who50 counts down to the 50th anniversary of Doctor Who by reviewing my favourite episodes and serials over the history of the programme, counting down from #50 to #1. Today, #11: "Human Nature" and "The Family of Blood", a two-part 2007 serial written by Paul Cornell and directed by Charles Palmer.


In 1913 England, quiet and awkward teacher John Smith begins a romance with school nurse Joan Redfern. By day he unwillingly shapes his boys into the young soldiers they will be when the First World War breaks out in a year's time. By night he is plagued by dreams of travel through time and space, of Daleks and Cybermen, and of someone called the Doctor. Only Smith's housemaid Martha knows that he is actually the Doctor, on the run from the mysterious Family of Blood - and that the Family has finally discovered his hiding place.

"Human Nature" is a two-part serial so well written and observed by Paul Cornell that it actually feels a little out of place in Doctor Who. With the serial numbers filed off this could have been its own exceptional science fiction series, but as it stands it's merely one of the greatest Doctor Who stories of all time. It's Cornell's second crack at the story, since he first wrote it as a broadly acclaimed Doctor Who novel in 1995. It is heartfelt, lyrical, scary, romantic - and above all it pushes the series into a place it's never previously occupied.
Perhaps the most telling moment of the entire story is at its climax, when John Smith is faced with the need to transform from mild-mannered human teacher to ageless, regenerating, genocidal Time Lord and he doesn't want to do it. We're so used to seeing the Doctor as this whimsical, fun, energetic character. We're completely conditioned into thinking of his as a wonderful hero. We rarely get the opportunity - as we do here - to acknowledge that the Doctor is a horrifying presence. Yes he's smart, funny, warm, protective and so on, but he's also brutal, and merciless, and can kill you without a moment's hesitation if you catch him in the wrong mood. Some fans point to this story as an answer to 'what if the Doctor became a human?' Instead it's very much an exploration on precisely why the Doctor isn't human.

Even with its exceptional scripts, this serial wouldn't be the masterpiece it was were it not for its uniformly brilliant performances. David Tennant gets to stretch himself in a completely different role, while Freema Agyeman (whose performance I've never really liked, to be honest) benefits from having the spotlight for much of the story. Jessica Hynes does a great performance as Joan, as does Thomas Sangster as student Tim Latimer. The standout performance, however, belongs to Harry Lloyd as Jeremy Baines - a local student absorbed by the Family and who acts as their spokesperson. He's creepy as hell, and is I think one of Doctor Who's most unfairly overlooked villains.

We're at the point where I have nothing to criticise about these stories. These are all brilliant, all the time. Next week we dive into my top 10, but we're already at the point where the series is for all intents and purposes utterly faultless.
Posted by Grant at 3:20 PM