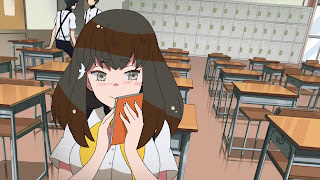 I'm not sure what to make of Gatchaman Crowds. It's the fifth iteration of the popular Science Ninja Team Gatchaman anime, which was popularised in the West as Battle of the Planets. Aside from the title and the logo I'm not entirely sure of this new series' connection to the original. It premiered in Japan last month and currently streams on Crunchyroll.

Hajime Ichinose is a high school student with an obsession for stationary - particularly daily planners. When she is selected by the mysterious Lord JJ to join the Gatchaman, she finds herself enveloped by a secret world of pixellated monsters and super-powered heroes. Using a magical notebook she transforms into a scissor-wielding robot girl with pigtails. Her partner is a mechanical samurai. Their boss is a super-deformed alien that looks like a panda but who also hates pandas.

Is it just me? Do I just randomly pick the strangest anime to try out? I thought AKB0048 was weird. This is another level of strangeness altogether.

This debut episode is certainly very well animated, with a nice crisp look and strong design work. It's produced by Tatsunoko Productions, who produced the previous four versions of Gatchaman. The most striking thing about the series is its bold colour: I don't think I've seen an anime this vivid-looking since Summer Wars.

All told, however, it's a slightly maddening episode to comprehend: a little too much of the wrong kind of information is dumped in the viewer's lap, and nowhere near enough of the right kind is delivered. The final result is that I'm intrigued, but also rather confused. Hajime is certainly a very charming and upbeat protagonist, but I'm not sure she's enough to sustain my interest long enough to find out exactly what's going on. Plus the apparent lack of a connection to its namesake is driving my crazy - Lord JJ is voiced by one of the original Gatchaman actors, but that's really not enough of a link.
Posted by Grant at 9:03 AM