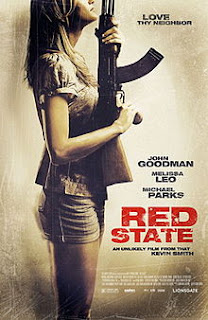 Kevin Smith doesn't want critics to review his films. He railed against them for saying mean, unfair things about his movies. I'm just guessing, but I'm pretty sure no professional critic goes into a film wanting that film to suck. They do have to sit through it, after all. It leaves me in a very minor quandary though, because I've just watched Smith's 2011 thriller Red State and I'm not sure whether I should review it or not. I mean, I've been paid to write film criticism, but not very much and certainly everything on the blog I do for free. So: am I critic? If I review Red State am I writing against the wishes of its director?

Red State is written and directed by Smith. It follows three teenage boys who, on the promise of group sex, are led into a honey trap by Westboro-style religious cult and threatened with murder for their perceived sins. It's about as sharp a career turn as a director could achieve: after close to two decades making dialogue-heavy, profanity-laden comedies, Kevin Smith has made a tense, politicised and socially relevant thriller.

There's an awful lot to like about this film. For one thing it does a great right-turn about 20 minutes in and all but changes genres. It starts off firmly in the direction of survival horror (or 'torture porn', as stupid people tend to call it) before the action ramps up considerably and it transforms into a sort of action-come-thriller with the cult facing off in armed conflict with the ATF. As it's a Kevin Smith movie this is all done with a lot more dialogue than you'd usually see, and this gives the film quite a distinctive feel. It's also surprisingly cynical, dark and blunt: don't watch this film if you're after a happy movie. The film is shot in a handheld style, giving it a sense of immediacy and roughness that suits the screenplay.

The film is headed up by a strong leading cast, notably John Goodman as the reluctant ATF regional head in charge of the siege but particularly Michael Parks as the charismatic, sly cult leader. He's having a whale of a time in the role, and delivers one of the best performances I've seen in a long time. He manages to walk a tightrope between being hilariously funny and chillingly unpleasant.

Kevin Smith appears to despite film critics because they write mean things about his films. Usually they write mean things because usually Smith's films are pretty awful. Red State is not awful. In fact, it's pretty terrific. Perhaps he should stop attacking critics who are just doing their jobs and start concentrating more on making films as strong as this.
Posted by Grant at 9:15 AM