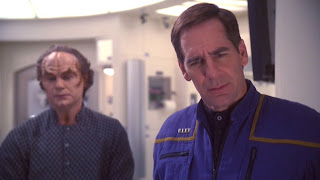 The Enterprise is dispatched on a rescue mission to the planet Xantoras, where a team of Denobulan scientists must be rescued before a planet-wide crackdown on extra-terrestrials sees them imprisoned or worse. En route the Enterprise recovers the crew of a critically damaged Antaran spacecraft. Archer learns that the Antarans and Denobulans have been mortal enemies for centuries, and the Antaran captain refuses to let Dr Phlox (a Denobulan) treat him.

"The Breach" is a very old-fashioned episode of Star Trek. Well not really old-fashioned: you wouldn't see it in the original 1960s Star Trek, but it wouldn't seem out of place somewhere around the later seasons of The Next Generation. It's divided neatly between an adventure-based A-plot - Reed, Tucker and Mayweather searching a massive cave system for the missing Denobulans - and a moral quandary for the B-plot. Not only does Hudak the Antaran refuse to let Phlox treat him, but Phlox's personal ethics bind him to obey no matter what Archer orders him to do.

This is a great episode for John Billingsley as Phlox struggles on several fronts: he's fighting Archer over how to treat his patient, he's fighting with his patient who vocally despises his very presence in the medical bay, and he's fighting with his own guilt and remorse over how his own species have treated the Antarans. Billingsley plays the episode incredibly well, and demonstrates again why in his hands Phlox is one of my favourite characters in the series. He's supported well by Henry Stram as Hudak. Both are honourable men, yet the past can't help but put them at odds.

The caving plot is not anywhere near as interesting, but it's a more straightforward diversion that helps to fill the episode out and provide some contrast. Director Robert Duncan McNeill (Tom Paris in Star Trek: Voyager) does a very good job of shooting the cave sequences so that they don't look like every other cave set in Star Trek history. That's actually a pretty amazing feat when you think about how many caves we've seen over the past 47 years.