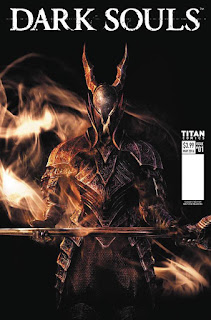 Dark Souls has been an unexpectedly huge franchise for Bandai Namco; the third game in the franchise was recently released, and despite being a quite harshly difficult game usually suited to a hard-core fanbase, it has managed to become something of a mainstream hit.

Cashing in on that success is British publisher Titan Comics, whose growing range of licensed titles are turning them into something akin to Dark Horse at their Alien/Predator/Star Wars peak. This past Wednesday they released Dark Souls #1, a spin-off comic book written by Doctor Who comic book writer George Mann and illustrated by Alan Quah.

Quah's artwork makes an immediate and sensational impact. This is the best illustrated comic book of the week, with a beautiful painterly quality and a rich gothic tone. Komikaki Studio has handled the colours, which are evocative and subtle. If fans of Dark Souls want some exceptional artwork to pore over in between rounds of playing the game, then this is absolutely a must-purchase.

Under the cut: reviews of Aquaman, Robin: Son of Batman and The Shadow Glass.

Since Dan Abnett took over Aquaman the book has really rediscovered its groove, with a strong storyline, likeable characters and some creative new directions for the character. While Aquaman and Mera continue to forge new diplomatic links between Atlantis and the surface world, more answers are found about the murderous monster named Deadwater. Strong writing, great art by Cifuentes and Castro - what more can an Aquaman fan desire? This book is getting relaunched in two months, but from the look of things it will pretty much remain business-as-usual. With this current team working so well that makes me happy. (4/5)

I continue to adore Ramon Bachs' wonderful artwork for this series in recent issues: it has a wonderfully exaggerated and kinetic style that manages to really express a child-like joy about being Robin. The script by Ray Fawkes is also highly enjoyable, bringing together for pretty much the very first time Damian Wayne, his father Bruce and his mother Talia al Ghul, fighting together on the one side. It's a wonderful thing to see, and helps build a marvellous series climax - I think there's one issue left to go. (3/5)

Aly Fell's beautifully illustrated Elizabethan fantasy continues, as Rosalind encounters her father - who does not know who she is - in the home of the occultist Dr John Dee. There is a slightly old-fashioned quality to the story and dialogue of this book, but I really think that adds to its charms. Its art for certain, however, is second-to-none. It really feels like something one would find in a hardcover French bandes-dessinees than a floppy American comic book. This is a must-read for fans of historical comics, and 16th century occultists. (4/5)
Posted by Grant at 11:14 PM