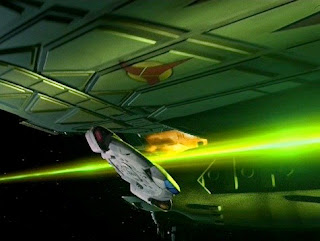 It is 22 April 1996, and time for another episode of Star Trek: Deep Space Nine.

Jake (Cirroc Lofton) is kidnapped by the mirror universe Jennifer Sisko (Felicia M. Bell) as a lure to draw Benjamin (Avery Brooks) over to help in the fight against the Klingon-Cardassian Alliance. Once there he is forced to help Smiley (Colm Meaney) finish building a replica of the Defiant based on stolen plans from their last encounter. Meanwhile the Alliance Regent Worf (Michael Dorn) is rapidly bearing down on the liberated station Terok Nor.

The mirror universe episode has become an annual event for Deep Space Nine at this point, but it is an event that - for this viewer at least - rapidly wore out its welcome. "Shattered Mirror" is proof that constant returns to the same well such as this simply lead to diminishing returns. The story feels the same, but the initial fun of seeing alternative versions of the lead cast has long since withered.

Most elements of the episode are overly familiar as they get trotted out once again: the bitchy, seductive Intendant Kira (Nana Visitor), the arrogant and abrasive mirror Bashir (Alexander Siddig), and so on. There are some new inclusions, like the power-mad Regent Worf, but all in all it feels like yet more of the same without enough to justify the episode.

There's much here that does not feel natural or believable. The idea that a group of human rebels with limited resources could build an exact duplicate of the USS Defiant beggars belief. The arrival of Worf as a major antagonist is understandable given Michael Dorn's joining the Deep Space Nine cast, but it simply cannot help but feel shoe-horned into place.

The episode's saving grace - and it only partially saves it - is the excellent work done with Jake and Jennifer. Cirroc Lofton delivers a very strong performance as a young man coming face to face with a duplicate of his dead mother. His reactions are mixed and well considered. Critically Jake is written here not as a child but as an intelligent young man who knows Jennifer is not his real mother and never treats her as such. He is drawn to her, and instinctively likes her, but he is not suffering under any illusions about who she is. The episode's tragic final scene, in which he loses this Jennifer just like he lost his own mother, is nicely portrayed and staged.

That, however, simply is not enough to save the episode as a hole. This is a decidedly ordinary episode, and easily skipped. We're 19 episodes into the season with 12 good episodes: the quality ratio slips to 63 per cent.
Posted by Grant at 1:35 PM