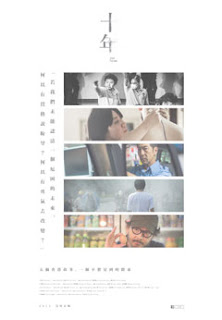 Ten Years presents a dystopian future for the Chinese city, in which Mandarin has become the sole official language, gangs of teenage agitators bully shop-owners who dare to sell banned goods, and a political activist sees no means of effectively protesting mainland Chinese control other than self-immolation. The film was produced on a shoestring budget of about HK$500,000 (approximately US$65,000) and has to date grossed more than HK$6 million in local cinemas.

As a science fiction enthusiast, it pleases me to see a science fiction film win Best Film at any country's national film awards. As a fan of Hong Kong - the city, its people, and its culture - the film's enormous success and acclaim points to a rapidly-building discontent with Beijing's steady growing interference in Hong Kong's affairs.

When Hong Kong was formally handed over from the United Kingdom to the People's Republic of China in 1997, a 'one country, two systems' agreement was signed that ensured the city would retain its own laws and government - barring national defence - for a period of 50 years. That agreement appears to be on shaky ground, due to a combination of external pressure from Beijing and internal actions by a generally pro-Beijing Hong Kong government - known as the legislative council, or LegCo.

Rising public sentiment has been challenging Hong Kong's current legislative council, which is seen as actively pro-Beijing and too willing to capitulate to directions from the Chinese state. A well-publicised incident in late 2015 saw the staff of a popular Causeway Bay bookstore reportedly kidnapped by Chinese police from Hong Kong and then charged with a variety of unrelated charges on the mainland. The bookstore was well-known for selling books that had been banned in China, and had become popular with mainland tourists visiting Hong Kong. Throughout this still-ongoing affair, the legislative council has been criticised for not standing up for the city's own citizens and residents. Current Hong Kong Chief Executive C.Y. Leung is currently the second-least popular leader in the city's history, with his approval rating sliding to as low as 37.5 per cent at the beginning of this year.

It is not two years since the student-led Umbrella movement brought Hong Kong streets to a standstill with sit-ins and lengthy protests. Joshua Wong, the student who led those protests, has recently formed a new political party for the city's forthcoming elections. That party's main policy platform is the independence of Hong Kong from the People's Republic - even though actively agitating for such a separation is illegal under Hong Kong's post-1997 law. Tensions remain particularly high within the University of Hong Kong, around which the Umbrella movement centred and which has courted controversy with students and activists after the appointment of the aggressively pro-Beijing former education minister Arthur Li as council chair.

In this environment of growing dissatisfaction and popular tension regarding Hong Kong's future, Ten Years appears to be the right film released at the right time.

It is clear that the Chinese government is not pleased with Ten Years or its awards success. For the first time the Hong Kong Film Awards were not broadcast or streamed by Chinese state media. When reporting on the ceremony, state newspaper Global Times claimed that interest in the awards this year were at an all-time low and that local audiences wanted to see better and more populist films: a veiled but clear attack on this year's winner. This is not the first time Ten Years has come under attack from the Chinese media, with previous editorials calling the film 'ridiculous' and claiming it was only of interest to a small number of Hong Kong malcontents.

I hope its release on home video comes soon; I am very keen to see it.
Posted by Grant at 9:49 AM