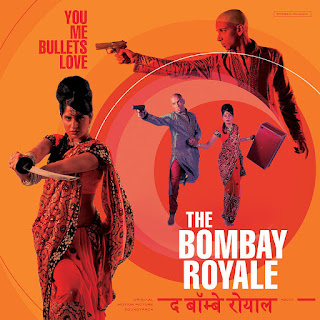 The Bombay Royale is an 11-piece independent pop group based in Melbourne, Australia. The group was formed in 2010 by musician Andy Williamson, and it was initially devoted to performing covers of songs from 1960s and 1970s Bollywood movies. They rapidly segued into writing and performing original songs, albeit ones overwhelmingly inspired by the kind of popular Indian music they were covering.

They really are a band you need to see live, given they not only sing songs but enthusiastically perform them. Lead singers Parvyn Kaur Singh and Shourov Bhattacharya front the Bombay Royale with a surfeit of energy and personality. The nine musicians are each clothed in a different weird fancy dress - one a ship captain, one a masked bandit, and so on. They blend Indian popular music with funk, surf rock and even elements of disco. In short they are a near-perfect multicultural party band, well-suited to be lined up at the next festive gathering before jumping to the dance floor.

They have found a lot of success too, playing not just Melbourne but the USA and Europe. They have played at WOMAD and at the Kennedy Centre. Their songs have popped up in the videogame Far Cry 4 and the television series Better Call Saul.

You Me Bullets Love was the Bombay Royale's debut album, released back in 2012. It's wonderful.

The Bollywood influence extends to the album's charming cover, styled as an Indian film soundtrack, and is typical of the sort of performative style the band employs. It really sells what the album is about: Indian pop music, self-awareness and fun.

"Monkey Fight Snake" is a sensational instrumental prologue, combining electric guitars and a heavy brass section for a tune pulled straight out of the early 1970s. It flows right into the title track, "You Me Bullets Love", a fast-paced song with both Singh and Bhattacharya singing in tandem.

"Jaan Pehechan Ho" is a cover of a popular Hindi song, first performed by Mohammad Rafti for the 1965 film Gumnaam. It's a solid sort of swinging number, and definitely showcases by comparison just how on-target the Bombay Royale's original songs are. There's precious little difference.

There's a really nice change of pace in "Sote Sote Adhi Raat", which heads much more in the direction of late 1970s electronic music and disco. The next track, "The Perfect Plan", flips the tone back to guitar-based funk. It's also the first song on the album to employ English-language lyrics. Surf rock takes a turn in "Bobbywood", and that style continues to an extent in "Mahindra Death Ride". The former track is much more successful than the latter, which feels like the most generic and throwaway track of the album. Similar problems strike the next song, "Oh Sajna"; not bad, just too similar to other, better songs on the album. Thankfully "Dacoit's Choice" is real bounce back to form, with a very strong funk style. It is probably my favourite song of the lot.

The album concludes with "Phone Baje Na", a rather relaxed number with an easygoing beat. It's a slightly surprising final number, since my instinct was for them to close on something much more bombastic and pacy, but it works very well.

You Me Bullets Love is very much the sort of album you play in the background, either at a party or while mucking around at home. It's tuneful, addictive and really enjoyable. The Bombay Royale are a band that does run the risk of coming across as rather post-colonial - Indian-style pop originated and run by a non-Indian Australian - but thanks to the striking presence of its two immensely talented singers and a visible respect and love for the source material I feel they stand up very respectfully. If you ever get the chance to see them live, take it with both hands.