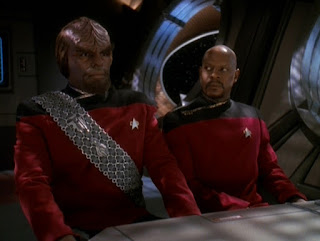 It's 8 April 1996, almost exactly 20 years ago, and time for another episode of Star Trek: Deep Space Nine.

Worf (Michael Dorn) is on trial for opening fire on an unarmed Klingon civilian transport, causing the deaths of 441 people. Captain Sisko (Avery Brooks) vigorously defends Worf before the Federation arbiter while Odo (Rene Auberjonois) investigates the case from behind the scenes. Could Worf possibly be guilty?

Of course not: it is not as if the series is going to see Worf prosecuted and sent to prison. This pretty much means the episode killed stone dead as soon as it begins. Episodic drama is always going to have an element of false menace: the heroes will be threatened with death, but we know 99 times out of 100 they are going to pull through. The difference is that in the heat of an action sequence the speed of the scene allows us to ignore the obvious safety of the characters. When we spent 42 minutes watching Commander Worf frowning in a courtroom, we have too much time to realise he is going to come out fine.

He winds up a remarkably passive protagonist, since the bulk of the episode consists of other people talking about him. Admittedly there is one satisfying moment where he gets so fed up with the Klingon prosecutor (Ron Canada) affronting his honour that he just stands up and punches the guy in the face, but that leaves a lot of screen time that is just Worf frowning and looking grumpy.

The testimony given by Worf's crewmates, about the incident itself, his behaviour beforehand, his general personality, is inventively shot with a lot of direct address to camera. It gives the episode a distinctive and unique aesthetic - one that seems very much derived from Kurosawa's Rashomon - and helps to make things a bit more interesting. They are not successful in lifting the episode up into being particularly enjoyable, but I do appreciate it is a worthy attempt. Director LeVar Burton acquits himself admirably. Script writer Ronald D. Moore? Not so much.

The episode does have a nice conclusion. Worf is, naturally, exonerated, but Sisko does still upbraid him for firing on what could have been a civilian vessel. He gets off from punishment because the entire event was a Klingon ruse, but his behaviour was still wildly inappropriate for a Starfleet commander. This kind of gravelling of the traditional Star Trek: The Next Generation idealism is one of the core elements that makes Deep Space Nine work so well, and even in what is a fairly mediocre episode it helps to make it a little better.

Despite a likeable guest performance by Ron Canada and innovative direction, "Rules of Engagement" simply is not very interesting. Were a viewer to skip it, they would not miss anything of note. It leaves Season 4 with 11 good episodes out of 17, and a quality ratio that slips to 65 per cent.
Posted by Grant at 9:38 AM