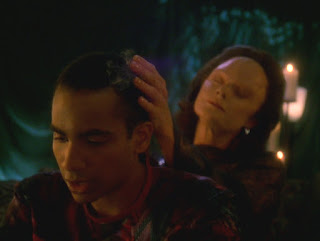 It's 29 April 1996 and time for another episode of Star Trek: Deep Space Nine.

If you can get through the pre-credits teaser of "The Muse" without rolling your eyes, you are a stronger viewer than I am. 'I'm pregnant,' announces occasional guest star Lwaxana Troi (Majel Barrett-Roddenberry) to Odo (Rene Auberjonois), who stares at her, slack-jawed. Cut to titles.

It is farcical, and much of what follows is farcical as well. The story of a pregnant Lwaxana hiding from her possessive new husband is not even the main storyline here. "The Muse" primarily follows Jake (Cirroc Lofton) as he falls under the spell of a mysterious and seductive alien woman (Meg Foster) who inspires him to write more fiction. She draws energy from him, vampire-like, as he does.

The bottom line is that neither storyline in "The Muse" works to any proper satisfaction. The idea of an alien woman inspiring Jake to be an artist while simultaneously feeding off him is the sort of low-drama idea that only writers themselves would think could possibly be interesting. It is a shame, since Cirroc Lofton is a great actor and rarely gets showcased in the series like this. He finally gets a chance, and he is given a really poor script. Meg Foster is great as the titular muse Onaya, managing to make her character both seductive and deeply creepy, but like Lofton she is working against some really poor writing. There are a few neat touches - the novel Jake begins to write, for example, is Anslem: the book for which his future self was famous in "The Visitor".

This is the third time around for Odo and Lwaxana, and while the actual plot they are playing is ridiculous, they share some unexpectedly effective scenes together. So while the storyline about an angry alien man coming to take away Lwaxana's baby once it is born is fairly tedious, the moments that Lwaxana and Odo share together are intelligent, gentle and unexpectedly touching. Even some of her brief scenes with other members of the Deep Space Nine cast demonstrate some unexpectedly funny comedy. Michael Ansara - better known for playing Klingon captain Kang - gives a dignified and engaging performance Lwaxana's husband Jeyal, but like his co-stars he's let down by the script.

This was the final appearance in the Star Trek franchise for Lwaxana Troi. She started, and indeed spent much of her on-screen time, being a strange irritant for viewers. She finishes her somewhat nuanced and intriguing. She remains imperfect, but at least the Deep Space Nine writer's room found a way to make her watchable in a way the Next Generation writers never did.

Despite some occasional highlights "The Muse" is a poor episode of Deep Space Nine. It leaves Season 4 with 12 good episodes out of 20, with five more to go. The quality ratio slips to 60 per cent.
Posted by Grant at 9:53 AM