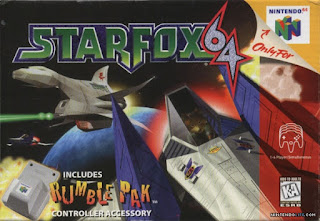 Star Fox 64 was a much-anticipated sequel to the popular SNES game Star Fox. In both games the player controlled space fighter pilot Fox McCloud, who was as his name suggests an actual fox, as he led a squadron of fighters against an alien invasion. It is for the most part an 'on rails' space shooter, by which I mean the player has only limited control of her or his space fighter as it travels through the level. Instead the player controls the direction in which he or she wishes to shoot at things. It is a format that become reasonably popular in the mid-1990s, reaching its creative height with Sega's excellent Saturn title Panzer Dragoon Zwei.

So sure, the game has relatively simple gameplay; that only really accentuates its charm as a breezy, populist action title. It is a pile of fun, whether due to the then-slick graphics, the amusing anthropomorphic animal cast, the voice acting or indeed the simple gameplay. Star Fox 64 is a game that one can simply pick up and play without worrying too much about the controls or the objective. As it progresses it does provide some variety: a few free-roaming levels, different vehicles and so on. A four-player made added yet more content, and made Star Fox 64 a reasonable replacement at parties should people get bored with GoldenEye or Mario Kart.

The game came packaged with the Nintendo Rumble Pak accessory: a small unit the player could plug into the memory card slot on the underside of the console's controller. It vibrated based on what the player did in-game, providing a physical sense of feedback to match the sound and vision. The Rumble Pak was such a popular addition to the Nintendo 64 that rival Sony had released a force-feedback controller for their PlayStation console by the end of the year. Today force-feedback controllers are an industry standard.

Rights issues over the Star Fox name - Nintendo were concerned the title was too close to a German corporation named StarVox - precluded its use in Europe and Australia. The same issue had led to the original SNES Star Fox getting retitled Starwing in those territories. In the case of the sequel, the title was changed to the rather uninspiring Lylat Wars. With the closure of StarVox this naming issue appeared to go away. Subsequent titles in the franchise - Star Fox Adventures, Star Fox Assault, Star Fox Command and others - all used the same title worldwide.
Posted by Grant at 6:31 PM