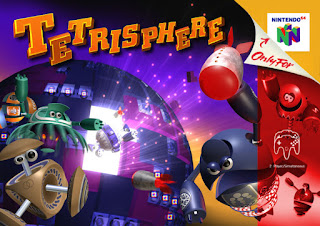 Canadian developer H2O Entertainment started working on a new puzzle game in 1995, to be released on Atari's struggling Jaguar console. The game involved shifting groups of coloured blocks around a sphere in order to destroy them and eventually reveal the core underneath - and thus win the level. It was the sort of high-concept puzzle game that traditionally sold quite well on videogame consoles. After Nintendo purchased the rights to release a version of the game for the Nintendo 64, the Jaguar collapsed and the game - then titled Phear - became a Nintendo exclusive. Since Nintendo held the rights to the legendary puzzle game Tetris the new game was retitled Tetrisphere, partly to reflect it's Tetris-like gameplay and aesthetic and partly as a bluntly commercial sales pitch. The gambit worked: while lacking significant marketing upon release Tetrisphere still managed to become a solid seller for the N64 and a very popular puzzle game.

Like all good puzzle games, Tetrisphere is relatively quick to learn, but proves fiendishly difficult to complete once played at higher levels. It is wonderfully addictive, with quick mutterings of 'oh just one more go' quickly leading to all-night sessions of obsessive block-moving.

It is also very well designed in that the spherical playing surface gives a sense of complex three-dimensional space, but in terms of actual gameplay it is actually remarkably clean and simple. That is of course the way it should be: the graphics are, for their time, rather striking, but the gameplay is concise, readily understandably and very, very addictive.

The gameplay and graphics are enhanced by a techno soundtrack by composer Neil Voss. It's fair to say the music dates the game terribly, but that is not a drawback. One of the core appeals of returning to old games decades after the fact is revelling in their age and the context in which they were first made.

The enjoyment of Tetrisphere was extended by a number of additional modes, including versus modes opposite either a computer-controlled opponent or another player, as well as Puzzle, Rescue and Hide & Seek. None were quite as satisfying as the central game, but they added value and were more often than not a pleasing diversion.

Despite its success at the time Tetrisphere did not ever get revived for a future console. It still sits there, waiting for Nintendo to remember its existence and revive it for a new iteration. The possibilities for motion control feel enormous.
Posted by Grant at 11:06 PM