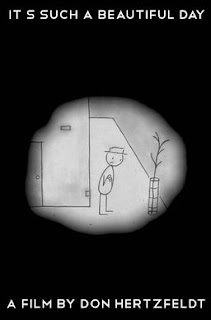 Don Hertzfeldt is one of the most singular talents in American animation. His short films, including Billy's Balloon, Rejected and Wisdom Teeth, have been a constant and joyful surprise. They blend deliberately primitive, near-stick figure designs with a wonderful sense of the absurd and a gleefully dark, bleak sensibility. He has established a strong reputation with them, including awards, Oscar nominations, and even an invitation to create a couch gag for The Simpsons (it was weird).

Between 2006 and 2011 Hertzfeldt completed a series of three animated shorts - Everything Will Be OK, I Am So Proud of You, and It's Such a Beautiful Day. In 2012 he edited them together into a single 62-minute animated feature, sharing its title with the third of the three shorts. It is an incredible work, managing to be in turn wonderfully silly, charmingly absurd, deeply depressing and ultimately quite transcendent. It is a film that gives the viewer so much more than they might expect upon first seeing it. I am still rather struck by just how profoundly moving it turned out to be.

The film follows Bill, a seemingly depressed urban worker whose memory appears to be slipping from him, and whose family history contains a bizarre number of odd individuals and incidents. As Bill's story progresses, odd events and references begin to make more sense, and a far more depressing, haunting story begins to emerge.

What Hertzfeldt has successfully created is the story of a man slowly succumbing to and dying from a brain tumour - at least that's what appears to be afflicting Bill, since Hertzfeldt never entirely makes it clear. By using imaginative and abstracted animation techniques, however, Hertzfeldt manages to tell the entire story of Bill's decline, hospitalisation and inevitable death entirely from Bill's own point of view. It's a fractured telling as a result, and one in which odd phrases and imagery in one chapter suddenly gain clarity and relevance in another.

While the subject matter is particularly morbid - and I suspect would cut very close to the bone with anyone who's lost a loved one to brain cancer - Hertzfeldt still manages to pack the film with a tremendous amount of comedy. Some of it is simply wry observation. Some of it is deliberately odd weirdness. Much of it is simply perfectly-observed representations of human behaviour.

As someone who has followed the director's career since the early 2000s it is wonderful to see how far his technique has evolved and expanded. In the case of It's Such a Beautiful Day there is wonderful use of live-action footage and stop-motion incorporated into his standard primitive black and white drawings. It enriches his earlier aesthetic without significantly changing it. This is upon immediate glance a Don Hertzfeldt film, yet it is also uncharacteristically nuanced.

There is a progression through the film, from the humorous to the dramatic to the tragic and, in the end, to the remarkably profound. This is an animated film that really sticks in the mind - and the heart. It's a tremendous achievement.
Posted by Grant at 7:41 AM