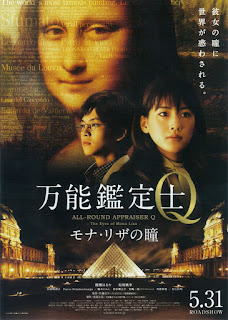 Riko Rinda (Haruka Ayase) is a professional appraiser, working out of her own small business All-Round Appraiser Q. Upon the invitation of the Louvre art museum, Riko travels to Paris - a dogged young journalist (Tori Matsuzaka) in tow - to appraise the legendary "Mona Lisa" and ensure it is delivered safely to the Tokyo History Museum. Before long it is clear something is awry, and a mystery is afoot.

All-Round Appraiser Q: The Eyes of Mona Lisa is an adaptation of one volume from a popular series of mystery novels by Keisuke Matsuoka. The books follow Riko Rinda's adventures around Japan and the globe, solving mysteries and preventing crimes wherever she goes. The character is clearly a sort of female Sherlock Holmes, with journalist Ogasawara as her dutiful Watson analogue. The film, on the other hand, has clearly been sculpted to capitalise on both the popular Warner Bros Sherlock Holmes films starring Robert Downey Jr - the soundtrack is a dead giveaway - and the best-selling Dan Brown novel The Da Vinci Code. It is slickly produced, and engagingly performed, but also rather silly and in the end only partially successful.

The film is paced and shot like a high-budget Hollywood thriller, with some beautifully shot scenes and wonderfully warm and rich colour tones. It takes great advantage of its settings, including scenes shot at the actual Louvre in Paris - the first Japanese film to do so. If one's concerns with a film were purely technical, it is likely Appraiser Q would be very satisfying.

The cast are relatively strong as well. Haruka Ayase plays Riko with a gentle warmth and a generally calm demeanour, which contrasts with Matsuzaka's jittery, nervous performance as Ogasawara. Eriko Hatsune is rather striking as Misa, a rival appraiser turned partner. Her performance is deeply intense, in a manner that draws the viewer's attention to her whenever she is on screen. Pierre Deladonchamps seems remarkably at ease playing Louvre curator Richard Bie - often European actors come across as slightly awkward and ill-at-ease in Japanese films, but he fits right in.

The film's drawback - and it is a fairly crippling one - is the stupidity of its plot. It presents a mystery with a couple of surprise twists, but it is a mystery that is easy to solve with twists that are very predictable. If I had not known going in that the film was based on a novel I would have assumed it was directly adapted from a children's manga, so foolish are the story beats and how unintelligent the characters are required to be in order for them to work. The film looks good, and is performed well, but it is all in service of a bad screenplay. There is fun to be had, but it is the sort of fun one gets by deliberately overlooking critical faults.

The lengthy title of the film clearly anticipates sequels some time down the line. To date no such sequel has eventuated or been announced. In a way it is a bit of a shame. Ayase and Matsuzaka are appealing performers, and they play entertaining and likeable characters. With a stronger story and a better screenplay, they really could have turned All-Round Appraiser Q into an excellent ongoing franchise.