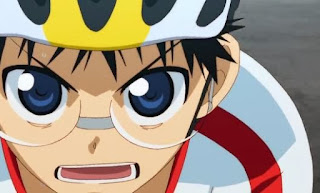 Onoda finally catches up with Naruko and Imaizuki. All three test one another's abilities as they make the difficult climb up to the peak. Imaizumi explains to Onoda about how the first rider to reach the peak will be declared "King of the Mountain" for the race. Naruko makes a break ahead, defying Imaizumi's dismissal that he is purely a sprint racer. As the peak approaches, Onoda decides to give his all in an attempt to get there first.

Three cyclists ride up part of a mountain road. That is literally all that happens in this episode of Yowamushi Pedal. I worked out at the very beginning of the series that this was going to a drawn-out, leisurely-paced story, but this really is a lot slower than I had anticipated even then. This is Dragonball Z-style "takes three episodes to power up a fireball fistfight" kind of a pace, and while the characters remain likeable and the cycling trivia interesting, there really is a difference between 'slow' and 'much, much too slow'. In this episode at least we're crossing a line.

To its credit the characters remain likeable, and the additional snippets of background information on competitive cycling continue to be interesting. The problem is that the last episode ended with Onoda frantically pedalling up a mountain and this episodes ends with him pedalling up the same mountain. There is simply nothing here that requires an entire half hour to tell.

It is admittedly interesting to see that Naruko has a technique to handle hills. All too often in these kinds of series each character will be specialised to a ridiculous degree. Showing that Naruko is exceptional at sprints but still capable at hills is a nice concession to realism that I wasn't expecting to see.

We are also getting a better idea of the senior students in the cycling club, and their various personalities. Makishima is something of a bitchy cynic, who constantly doubts Onoda's chances. Tadokoro is more the gruff and silent type. Kinjou strikes me as the most interesting of the three: a sunglasses-wearing deadpan cyclist with a bluntly direct manner but an obvious comraderie with the junior members. Some anime do a ham-fisted job of introducing expanded casts. Yowamushi Pedal is taking its time to introduce them in waves, and that's a much better approach than throwing them at the audience all at once.

Despite this, the episode feels like an awful lot of filler. It leaves the series with five good episodes out of eight, and a quality ratio of 63 per cent.
Posted by Grant at 5:20 PM