Star Trek: The Next Generation: "Ship in a Bottle" 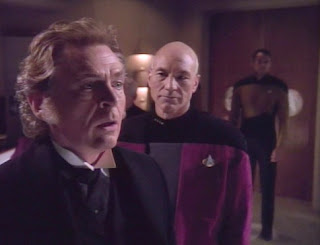 It is 25 January 1993, and time for another episode of Star Trek: The Next Generation.

An error in the Enterprise's systems leads Lt Barclay (Dwight Schultz) to accidentally re-activate the sentient holographic recreation of Professional James Moriarty (Daniel Davis), who demonstrates a frightening increase in intellect and ability as he takes over the ship and even exits the holodeck. For the sake of his ship and crew, Picard (Patrick Stewart) is forced to listen to Moriarty's demands.

It took four years for Star Trek: The Next Generation to revisit its Sherlock Holmes-themed episode "Elementary, Dear Data". Legal issues stemming from a litigious Conan Doyle estate combined with a lot of confusion over whether or not permission was required from the estate at all delayed things until they were finally sorted out for this sixth season follow-up. It is perhaps not as outwardly fun as its predecessor, but it is a rather clever episode and certainly does a decent thing in pushing the story into fresh directions rather than simply emulate the original.

There is something rather clever about "Ship in a Bottle". While it does not contain significant amounts of Sherlock Holmes-themed visuals - "Elementary, My Dear Data" was packed with them - it actually has far more Doyle-esque storyline. There is a mystery to be solved. Not only has Moriarty been revived, he seems to have a seemingly supernatural control over the Enterprise. He can defy known physics, exit the holodeck and walk around the ship. Solving this mystery of how Moriarty has achieved such a feat requires Data to emulate Holmes' process: eliminate the impossible, and then work things out from there. It is a nice little mystery as well, with a solution that is obvious if you think about it - but you have to actually think about it. For most viewers I suspect it will make a clever little twist.

Daniel Davis plays Moriarty a little differently the second time around. He was initially framed as a villain, but here he is simply a sentient intelligence desperately wanting to be free from his confinement. It turns the episode away from a hero versus villain set-up, since it is impossible not to feel Moriarty's frustrations. This is his final appearance in the series, but to be honest given how this episode ends that is appropriate - there is not anything left with this character to tell. Stephanie Beacham is a little less successful as Moriarty's holographic lover: she overplays what she has, and what she has is fairly stereotypical.

As far as sequel episodes go, this one pretty does everything right: it keeps what was good about the original, but also finds a fresh angle on the material. It manages to be a fun little Holmes-themed pastiche but also base itself around interesting science fiction ideas. Most of all it focus on its characters. This is another good episode for Season 6, bringing its total to eight good episodes out of 12. The quality ratio rises once again to 67 per cent.
Posted by Grant at 8:58 AM