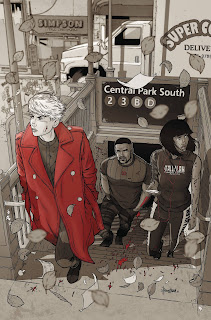 Way back 25 years ago, when Marvel's most popular artists jumped ship to make and own their own comics, Jim Lee wrote and illustrated the hugely successful superhero team book WildCATS. That soon expanded to an entire line of superhero books under a unified imprint named Wildstorm. Eventually Lee went to work for DC Comics, selling the entire Wildstorm line to them in the process. Some of those characters were incorporated into the DC Universe as a result of the New 52 relaunch. Now that original and separate Wildstorm Universe is getting a relaunch of its own, in Warren Ellis' 24-part maxi-series The Wild Storm.

It is a clever reboot of the various characters and settings, because Ellis remixes the elements into something that feels smart, fresh and socially relevant. At the same time older readers who enjoyed earlier iterations of the characters will appreciate the little nods and touches that are included along the way. It is an intriguing first issue, with plenty of characters and set-ups to keep the title going for quite a while, and its snappy dialogue and well-crafted personalities making an immediate and positive impression.  Jon Davis-Hunt provides some tremendously effective and clean artwork, which is subtlely coloured by Ivan Plascencia. It is a hugely attractive book, visually speaking. On a creative level at least, DC look set to have another hit on their hands. (5/5)

Jesse and her dog Sandor continue their journey across the USA to reunite her with her brother in a post-apocalyptic world where animals of all sizes and species have gained the ability to think and speak like humans. There is some really nice material in this issue about the practicalities of the future world: how animals developed their new intelligence, and the repercussions of such creatures having such comparatively short life-spans. It is one of the strongest issues of this series so far, with good writing by Bennett and appealing artwork by De Latorre. (4/5)

Batwoman gets a relaunch, spun out from the events of Detective Comics, and with Bennett co-writing her second comic for the week. While I do really like the character of Kate Kane, and was keen to see her take the spotlight in her own series again, this issue really is nothing more than a prologue. There is precious little story with which to engage the reader, and long-term fans of the character in particular may find it a bit of a chore. It feels like a terrible cheat, acting more as an extended advertisement for a comic than a comic itself. I suspect it's worth skipping this altogether and checking out Batwoman #1 in a few weeks. (1/5)

When Daredevil relaunched once again last year, it came with an unexplained jump back from California to New York and a revised status quo where suddenly Matt Murdock - who had outed himself to the world as Daredevil - was living a secret identity again. Writer Charles Soule has taken his sweet time, but finally is jumping back to explain how all of the changes actually happened. It's a slightly distanced issue, thanks to its retrospective narration: a better technique would have been to simply jump back and tell the story in the present tense. Garney's art feels a little rough for my tastes, but there's no doubting his talent. (3/5)

Mister Misery has taken Wong's body and soul, sending Strange on a quest to find and save him. The one overwhelming asset this issue has is guest artist Frazer Irving. He provides beautiful artwork, with a painterly feel and rich colours. He is a perfect fit for Doctor Strange - certainly a much better one than regular artist Chris Bachalo - and while I know it's unlikely they can keep him on the book month in and month out it would make me so happy if Marvel did. It really takes the book up a notch. (4/5)

Poe escapes Kaddak with his droid spy safely attached to his X-Wing, but the former First Order agent Terrex remains hot on his tail. This is a nice issue for tying together the plot threads of the previous short story arcs, and giving the whole comic to date a nicely unified feel. At the same time there's still an oddly unsatisfactory feel that hangs over this book: there's a lack of familiarity with the Poe Dameron character - he's not actually in that much of The Force Awakens - that stops the story working as well as others have with Darth Vader or Luke, Han and Leia. (3/5)

Miles' adventure with Spider-Gwen continues in the parallel universe to which his missing father was dispatched by SHIELD. At this point the novelty feels a little worn out. The quips work fine, and Pichelli's artwork is predictably great, but the story is just feeling that bit too ordinary. It is more like a travelogue of alternative characters than a well-crafted adventure. It is enjoyable enough, but we're getting limited returns with three more issues to go. (3/5)
Posted by Grant at 10:40 AM