Red Dwarf: "Give and Take" 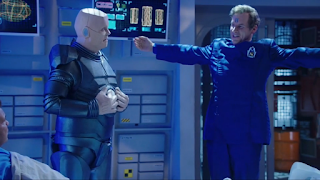 It is 6 October 2016 and time for another episode of Red Dwarf.

When exploring a soon to be destroyed space station, Lister (Craig Charles) is captured by an insane medical droid and has his kidneys removed. With only days left to life, he must convince the Cat (Danny John-Jules) to donate a replacement kidney.

With this 11th season of Red Dwarf there has been an enormous reliance on revisiting and remixing old storylines. This left the season premiere "Twentica" feeling particularly tired and repetitive, but managed to make the second episode "Samsara" a rather pleasant slice of nostalgia. "Give and Take" falls somewhere in between. There is some great character work and some genuinely funny gags, but the core narrative has simply been lifted from other episodes.

Way back in the series' second year there was a great episode titled "Thanks for the Memory", in which the characters went to sleep one night and when they woke up both Lister and the Cat have broken legs, a jigsaw puzzle has been mysteriously completed, and four days have been ripped out of Lister's diary. The attempt to find out what had actually happened led to each weird occurrence and mystery being explained. "Give and Take" employs a very similar technique: odd events and moments in the episode's first five minutes are eventually explained to be the result of time travel and future versions of the characters interfering with their own past. In that regard the episode also resembles Season 2's "Stasis Leak".

That is an unfortunate creative choice I think, because for me at least it led to "Give and Take" reminding me of two much better episodes, and drawing into sharp relief how the series - despite occasional highlights - simply is not as strong as it was in its prime.

It also cheats in weird ways. When Lister is drugged by an insane medical android and apparently has his kidneys removed, we see the kidneys in a jar. When the episode then travels back in time and the kidneys are replaced using past Lister's own kidneys prior to travelling to the station and encountering the android, one has to question whose kidneys were in the jar. It is easily hand-waved away by claiming they were simply a random pair of kidneys from one of the space station's original inhabitants, but it still feels like a cheat. In all honesty we didn't need to see kidneys there at all - it's a messy bit of storytelling, and while it feels petty to criticise it really does linger in the mind afterwards.

Thankfully there is some great material squeezed in between Lister and the Cat, as the former attempts to convince the latter to donate him a kidney. It has been great seeing the Cat's character get refocused after years of slipping into a weird sort of self-parody. Now his self-centred egomania is front-and-centre, and it has made him a much funnier character again.

In the end "Give and Take" is broadly watchable, but too derivative to fully succeed. This one was on the wire as far as recommendations go, but in the end it just is not quite funny enough to get the tick of approval. Red Dwarf Season 11 is three episodes in, but only one has been good. The quality ratio falls to 33 per cent.
Posted by Grant at 5:13 PM