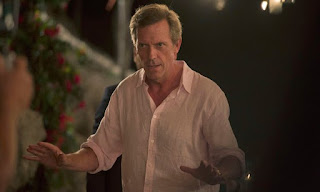 Jonathan (Tom Hiddleston) agrees to assist British intelligence operative Angela (Olivia Colman) in bringing down billionaire and suspected arms dealer Richard Roper (Hugh Laurie). To do so, he must create a believable and attractive back story for Roper to buy into and accept, and that means putting his own life and reputation at serious risk.

There seems to be a film-like storytelling style to The Night Manager. Each of the first two episodes has by-and-large told its own relatively self-contained mini-story. The first episode, set in Cairo and Switzerland, told the story of how Jonathan came to know of Roper and how the death of a woman he attempted to help left him intent on destroying Roper and bringing him to justice. This second episode is about how Jonathan transforms himself into a violent criminal to make himself a more likely candidate for Roper's operation. I like this sort of format, which reminds me quite a bit of fellow spy thriller series 24. It gives each episode its own sense of urgency and narrative, and ensures that despite the overall serialisation there is still a proper story each week with a beginning, middle and end.

Watching Pine transform himself from calm, international hotel manager into a violent, murderous drug dealer is a pretty phenomenal thing. Tom Hiddleston is demonstrated an extraordinary talent with this series, which does feel in part like an unofficial audition to replace Daniel Craig as James Bond. He has a tight, pent-up quality here, as he progresses pushes himself into further danger to make his new identity convincing. There's also quite a tragic side element to this episode, as a young local woman - he's hiding out in Dorset - clearly begins the tentative beginnings of a romance with him, only to be completely betrayed almost as an aside.

Pine's entire transformation is framed rather elegantly by a flash-forward: we begin the episode six months later in Mallorca, Spain, where Pine intervenes to save Roper's son from being kidnapped. We then get to jump back and discover how this violent altercation came about. There is a bit more of Hugh Laurie in this episode, and he is marvellously droll and subtly menacing, but wisely he is still being kept on the sidelines while we are better introduced to Pine.

What we do get a lot more of in this episode is Olivia Colman's wonderful performance as Pine's handler Angela Burr. She's weary, frayed and bitter. We get to see her working in her dark, grimy London office as well as inside the corridors of MI6 in scenes that reflect the sort of suspicious-looking 'old boys club' atmosphere of Le Carre's classic Tinker Tailor Soldier Spy. Burr was male in Le Carre's novel: I think changing her gender was an very clever choice. It makes her stand out from the establishment even more.

Two other characters get fleshed out a little more, despite both debuting back in episode 1. Elizabeth Debicki is impressive as Jed, Roper's current girlfriend, who balances a visibly brittle veneer of sexual playfulness in public with a wounded, traumatised core on the inside. She is clearly a mystery for the series - via Pine - to resolve as the episodes go on. There is an extent to which many of the series' female characters - Burr aside - feel like victims of an oppressive patriarchy, and I am still not one hundred per cent sure whether it's because it's a patriarchal novel (probably) or if there's actually a comment in there by the TV adaptation's writer David Farr (possibly).

Particularly watchable is Tom Hollander as "Corky", Roper's right-hand man. He's a bitchy, slightly unsettled sort of lead henchman, capable of making threats as easily as he makes sexual innuendos. He is a villain in that classic mode of 'whom we love to hate', and watching his seemingly-inevitable downfall should prove a particular delight.

This is stunning event television: it looks great, it's playing with archetypes and tropes in clever and satisfying ways, and there is not a single weakness across the entire cast. 'Must-see TV' is a terrible cliche, but in this case it's a cliche that is true.
Posted by Grant at 5:09 PM