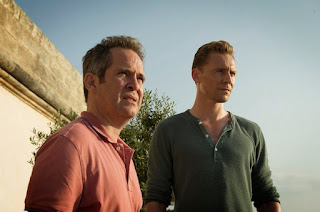 Jonathan Pine (Tom Hiddleston) has found himself stuck in Spanish island estate of billionaire-turned-arms dealer Richard Roper (Hugh Laurie). Now he has to ingratiate himself fully into Roper's service if he is to stand any chance of helping British intelligence pin him down. All the while Roper's right-hand man Major Corcoran (Tom Hollander) is watching Pine with suspicion, waiting for him to make a single mistake.

One thing you cannot fault about The Night Manager is its cast. There is not a single let-down in the entire group, whether it's Tom Hiddleston's intense, mercurial Jonathan Pine, or Tom Hollander's bitchy, predatory Corky, or Elizabeth Debicki's mysterious, brittle performance as Roper's girlfriend Jed. Each actors gives it their all, and transforms what are in the main very archetypal spy fiction characters into three-dimensional people. Sadly with this episode there are a few things to criticise about the script.

This episode feels like the series' first major misstep. It simply feels a bit too easy. Pine is accepted with surprising rapidity by Roper, and while Corky is deeply suspicious it never seems to present itself in action - simply catty insults and insinuations. Pine successfully breaks into Roper's private study and take photographs of his arms deal documentation so easily that it beggars belief, thanks to a room key in a bedroom drawer, a security alarm that tests itself for two minutes every morning at eleven'o'clock, and a bizarre lack of security cameras for a highly suspicious mogul engaged in the illegal arms trade. To an extent it feels like the series is racing through this part of Pine's mission to get to more interesting events in episode 4 to 6, but it does feel perfunctory and rushed.

Much more interesting is the collapse in marriage of Lord Sandy Langbourne (Alistair Petrie), Roper's closest confidante outside of Corky, and is increasingly bitter wife Caroline (Natasha Little). He is a laconic, corrupt member of the House of Lords. She knows that he is maintaining their lavish lifestyle by trading in illegal arms, as well as carrying on an affair with the nanny, and it is killing her inside. Watching her slowly self-destruct over the course of the episode - talking to Pine, interfering in Jed and Roper's relationship, and ultimately losing it in the mother of all screaming matches - is well-developed and somewhat heartbreaking.

There is a thread running through this series that is portraying women as victims in a world run by men. Sophia (Aure Atika) was an abused mistress murdered for her troubles. Jed is effectively trapped in a world in which she no longer wants to live. Caroline is helpless to stop her husband's infidelities and crimes. Angela Burr (Olivia Colman) is doing her best to take Roper down despite being woefully underfunded and undercut by rooms full of men back in MI6. The daughter of corrupt Spanish banker Juan Apostol (Antonio de la Torre) hangs herself in the bathroom during her own birthday party. It is a seemingly endless line of trauma and despair, and the big problem is that I cannot work out if it is an intentional bleak commentary or if it is the unintended consequence of a broadly stereotypical spy narrative. Either way, it makes for a troubling undercurrent.
Posted by Grant at 8:40 AM