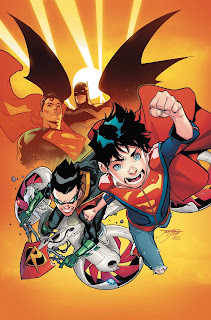 One of the greatest strengths of the DC Universe - when its editors aren't indulging in rampant Silver Age nostalgia - is its constant creation of legacy characters: new versions of old characters that transform those personas a little a keep the various franchises fresh and interesting for readers. Two of the best in recent years have been Damian Wayne - the arrogant, aristocratic son of Bruce Wayne and Talia al Ghul - and Jonathan Kent - the bright-eyed, hopelessly optimistic son of Clark Kent and Lois Lane. One has been Robin for some years now, and the other has adopted the Superboy identity as part of DC Rebirth. Now they're sharing their own monthly comic book: Super Sons.

It's a delight. It immediately reminded me of Young Justice, a much earlier team-up book featuring a different Superboy and Robin alongside Impulse (a Kid Flash variant). It's engaging, bright and tremendously funny. Peter J. Tomasi has a long experience writing for both characters, and Jorge Jiminez's artwork perfectly captures the script's tone.

They are a fantastic pair of characters, because they are effectively exaggerated versions of their respective fathers. Superman may be the straight-laced boy scout, but Jonathan is charmingly obsessed with helping others, doing the right thing, and taking down bullies. At the same time Damian is every iconic aspect of Batman dialled up to 11. He's moody, smart, stand-offish and an expert in tactics and hand-to-hand combat. The contrast between them throws huge amounts of comic potential into the air - a potential that this creative team seem very well-suited to capture. (4/5)

Under the cut: reviews of Aquaman, Batman, Green Arrow, and Superman. It's a DC Comics fiesta!

After addressing the United Nations for the first time, Aquaman comes face to face with his latest enemy - the mind-controlling cyborg Warhead. I have to admit I am not feeling it with this villain: it feels weirdly under-cooked and generic, like a mid-1990s refugee that fled an older comic because nobody could remember it. Early sections of this issue are more solid, and keep the overall storyline moving, but then it just falls into a bit of a heap. On the plus side, Eaton and Faucher's art is great as always. (3/5)

Batman continues to prepare for Bane's arrival in Gotham. Another issue of set-up, which follows a first issue of set-up - and that's a lot of building up to something without actually giving any big 'wow' moments back to the reader. After the nicely ominous tone of the last issue this one just feels like a bit of a let-down. Next issue it all may explode in the most satisfying manner possible, but for now it feels as if King is setting up something that is ultimately going to be disappointing in comparison to the hype. (3/5)

Oliver Queen just isn't getting a break at the moment. He has failed to clear his name after the police commissioner got murdered, a criminal syndicate has taken over his company, and now he's trading shots with Malcolm Merlyn. This is a solid issue but not a great one: the narrative pushes forward without any key sequence here to showcase the characters or present a killer action sequence. It's ostensibly the climax of the "Emerald Outlaw" storyline, but it feels like something designed to bridge two better issues. Otto Schmidt's art, however, is top notch. (3/5)

Jonathan Kent and his best friend Kathy go sneaking into Dead Man's Swamp on a night-time hunt for a missing cow and grandfather. It's a weird sort of an issue, showing off a sort of light solo adventure for Jonathan without his famous father in tow, and ending on an ominous sort of light cliffhanger. Fiumara's artwork is nicely old-fashioned, and actually matches the sort of 1970s O'Neill-Adams style that the script mostly hearks back towards. It does feel like an odd issue for Superman however: the big blue guy is essentially nowhere to be seen. (3/5)
Posted by Grant at 11:34 AM