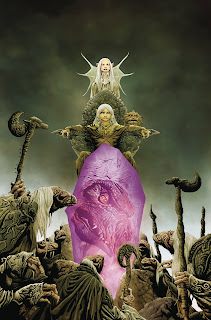 One of the most influential films I have ever seen in terms of making an impact on my life is Jim Henson and Frank Oz's 1982 puppet fantasy The Dark Crystal. It is hugely imaginative, without a single human being to be seen. It told a wonderfully dramatic quest story set in a superbly realised and distinctive world. While its initial theatrical release was a little underwhelming it became a massive long-term hit on home video, so much so that some years back attempts were made to produce a much-delayed sequel. Those attempts all failed, and with the project seemingly dead and buried Archaia - who have already produced a number of excellent adaptations of cancelled Jim Henson works - have been granted permission to adapt the screenplay into a 12-issue comic series.

20 pages is probably not enough to sufficiently judge such a lengthy and anticipated project, but taking the first issue as an indication it is wonderful to confirm not a foot has been set wrong. The tone is one hundred per cent that of Henson and Oz's original film. It is set 100 years later, as the Gelfling race has been restored and its people proclaimed custodians of the healed crystal. In comes Thurma, a fireling from a distant land, with a quest that may have grave repercussions to the Gelflings.

Simon Spurrier demonstrated himself to be a tremendous fantasy writer with his miniseries The Spire, and seems to be doing a great job here of translating a screenplay to a comic. Kelly and Nicole Matthews' artwork is absolutely wonderful, and captures the look and tone of Henson's fantasy works wonderfully. Jae Lee's striking painted cover is the icing on the cake.

The Power of the Dark Crystal #1. Boom Studios/Archaia. Written by Simon Spurrier. Based on the screenplay by Craig Pearce and Annette Duffy & David Odell. Art by Kelly and Nichole Matthews.

Under the cut: reviews of Darkness Visible, Divinity III: Stalinverse, and the very last issue of Revival.

Eighty years after humans and demons agreed to co-occupy the Earth, police detective Daniel Ashton is part of a special police task force appointed to police the demons. Mike Carey is a phenomenal writer at his best (I adored The Unwritten), but for whatever reason this new series feels very, very far from his best. The individual plot elements move in an acceptable manner, but there's simply no spark here. It feels weirdly generic. Brendan Cahill's art is competent but lacks a distinctive edge. Readers craving a new urban horror might find it worth checking this book out, but it does not seem like there is much else here to recommend anybody else give it a try. (2/5)

Valiant's parallel universe crisis continues, as Soviet forces catch up with Colin King and a climactic last-ditch conversation goes very, very badly. This issue - indeed, quite a bit of this series, is effectively 'inside baseball', and it won't likely make sufficient sense without having read the two previous Divinity miniseries. Thankfully they're both widely available and are excellent. Trevor Hairsine's artwork is strong, and nicely coloured by David Baron. Plotwise this issue feels slightly less effective than the previous two, and I'm straining to see how events will wrap up cleanly in the fourth and final issue. (3/5)

This week Tim Seeley and Mike Norton's self-proclaimed 'rural noir' Revival comes to an end. It has been a tremendous five-year run, with numerous stand-out issues and fantastic moments of horror. As it moved into its final phase the story seemed to wobble slightly, as the requirements to actually explain why the dead returned to life in a small Wisconsin town over-shadowed the book's ability to simply be weird, unsettling and creepy. On the one hand it feels very slightly anti-climactic, but on the other I am unsure there was a better way to go. Certainly it will all make for a fascinating and hugely entertaining read from beginning to end, without having to wait a month between each issue. I will miss the excellent cast of characters that Seeley developed, and I will absolutely miss Norton's wonderfully expressive, slightly abstracted artwork. I suspect time may see this as one of Image's all-time best titles - at least it should be. (4/5)