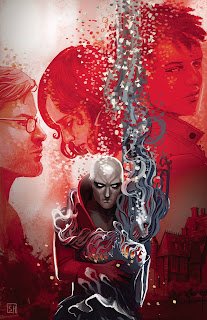 Deadman is one of those wonderfully charming old-school DC superheroes who is never going to be a mainstream success but who continues to foster a small, dedicated fanbase over the years. It was great to see DC give him a brief bit of exposure with the three-issue miniseries Deadman: Dark Mansion of Love, which came to a conclusion last Wednesday. It was a slightly odd format, with double-length issues published every two months - yet it was clear from their structure that it was definitely a six-issue series instead. I quite liked getting the larger chunks of story each time.

The story by Sarah Vaughn was ultimately a fairly predictable one, but it hit all the right beats to be a charming gothic horror story with a few neat contemporary touches. The real star for me was Lan Medina's artwork (aided by Phil Hester), which gave the series a wonderfully rich tone and style. Once collected into a single volume it should make a wonderful purchase for the Boston Brand devotee in your life.

I would be happy to see DC continue to publish some miniseries in this format and schedule, and give a few more semi-obscure characters a refresh. Fingers crossed that it happens soon. (4/5)

Under the cut: reviews of Batgirl and the Birds of Prey, Detective Comics, Doctor Aphra, Motor Crush and Southern Cross.

Batgirl and the Birds of Prey #7

Huntress and Black Canary go trailing suspicious realtors while Batgirl goes on a treasure hunt. While the script to this issue is pretty solid I'm a little less enthused about Claire Roe's artwork, which has that weak handle on perspective that plagues quite a lot of artists. That said, it does do its job and I wouldn't ever describe it as a significant drawback. The characters in this book, however, are great: it's so much fun to see them back working together again. (3/5)

It's not every week that a comic book reaches 950 issues. DC celebrates with an extra-length (and extra-priced) extended issue of Detective Comics that combines a showcase of Orphan - aka Cassandra Cain - with a nice conversation between Azrael and Nightwing, and a flashback to a tense conversation between Bruce Wayne and Tim Drake. It's half character profile and half set-up for future storylines, all of which sound pretty sensational. Each section is illustrated by different artists, but there's not a poor one in the bunch. As a little celebration it's pretty great. (4/5)

Aphra's mission to Yavin IV with her pious father has resulted in a confrontation with Imperial troops, and that confrontation only escalates this issue. This is a great issue for action, with big set pieces and funny moments that exploit the Star Wars catalogue of weapons and vehicles wonderfully. This is a hugely enjoyable series, breezy where it needs to be but underpinning by some really decent character work. If things continue in the vein I can really see Disney going for a Doctor Aphra movie before too long. (4/5)

Domino prepares to race for her ex-girlfriend's debts, but her addiction to Crush may stop her before she even hits the race. The one thing, after three issues, that is really impressing me about Motor Crush is its sense of identity. The writing, the art and the aesthetic are all running at the same speed in the same direction. It has a wonderfully unified tone that makes it stand apart from other comics on the shelves. It is also drip-feeding back story and context very smoothly as it goes, which makes it not only an enjoyable read but an addictive one too. (4/5)

Hazel and Kyril have a conversation with the severed head of a dead person while they are pursued across the surface of Titan by the Wolf Pit. This is a weirdly mercurial series, in which there has been a huge leap in story between the first arc and the second, and even within this second half the story keeps bouncing around in odd ways. It's surprising and suspenseful, but it also makes the whole thing feel very chaotic and messy. An arrival of a new character in this issue stretches credulity, but there is still plenty of drama and suspense to keep the series rolling - not to mention one hell of a cliffhanger. (4/5)
Posted by Grant at 9:57 PM