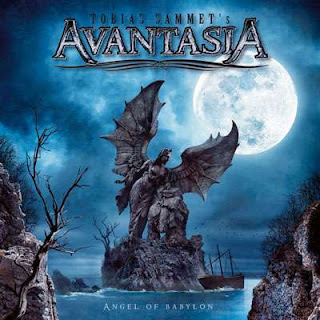 Avantasia is a rock opera super-group concept by heavy metal musician Tobias Sammett. It is a pretty simple concept: every few years he assembles a group of musicians from other European metal bands and gets them to perform a bunch of songs. The completed albums usually follow themes or narratives of one kind or another, but they also work as pretty great straight-up power metal CDs as well.

Angel of Babylon was released back in 2010 and was the third volume in a loose trilogy of releases. It was released side-by-side with The Wicked Symphony. Here Sammett used a core band including Sascha Paeth, Eric Singer (KISS) and Michael Rodenberg (aka Miro), and a group of musical guests including Jens Johansson (Stratovarius), Felix Bohnke (Edguy), Bruce Kulick (KISS, Grand Funk Railroad), Henjo Richter (Gamma Ray), and Jørn Lande (Masterplan).

"Stargazers" is a classic-style power metal song: a nine-minute epic track featuring four separate vocalists and a back-and-forth transition between fast-paced aggressive choruses and slower verses and bridges. Title track "Angel of Babylon" maintains a more constant upbeat energy, but simply lacks anything to make it distinctive or memorable. It's enjoyable enough, but is ultimately rather forgettable. The same, sadly, can be said of "Your Love is Evil". It's well-performed, enjoyable at the time, but lacks staying power.

"Death is Just a Feeling" features the vocal talents of Jon Oliva (Trans-Siberian Orchestra), as he undertakes his best Alice Cooper impression. The opening sequence is nicely creepy before diving into a brilliantly strong chorus. This feels like a very old-fashioned kind of rock-metal number, and it by far my favourite song on the album. There is a great tonal balance between orchestral music, heavy metal and horror movie aesthetic.

"Rat Race" is wonderfully catchy, with a fast pace and a generally enthused tone. "Down in the Dark", on the other hand, is a woefully generic number. It feels as if it's been pulled out of the bad parts of the 1980s and is ultimately a pretty dull song. "Blowing Out the Flame" keeps that 1980s vibe going strong, but feels quite a bit stronger. Obviously you need to enjoy this kind of song, but if you do it's a pretty satisfying one.

"Symphony of Life" brings some power behind it with a strong momentum and great choral backing. Cloudy Yang's vocals feel particularly good, giving the whole track a bit of an Epica vibe to it. "Alone I Remember" is just more generic 1980s stuff, while "Promised Land" is fast paced and reasonably enjoyable.

The album concludes with "Journey to Arcadia", another gloriously epic ballad boasting spectacular bombast and a lengthy running time that lets it really extend its full potential. It is a great conclusion to a pretty enjoyable album.

I adore this kind of European power metal: it's catchy, it's enjoyable to which to listen, and it has a great sense of humour at its heart. It's knowingly ridiculous, but also infectiously fun.