Star Trek: The Next Generation: "Chain of Command, Part II" 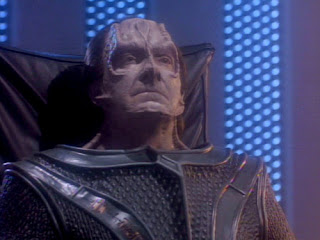 It is 21 December 1992, and time for another episode of Star Trek: The Next Generation.

Captain Picard (Patrick Stewart) has been captured by the Cardassian Union, and is tortured for intelligence by the interrogator Gul Madred (David Warner). Meanwhile the USS Enterprise prepares to prevent an illegal Cardassian expansion while Captain Jellicoe (Ronny Cox) and Riker (Jonathan Frakes) butt heads over whether or not to rescue Picard.

There is a pretty simple strategy for generating great drama, which is to put two talented actors in a room, and have them play two interesting characters in conversation. It's a technique that is well played here, as Patrick Stewart and David Warner - both exceptional British actors with extensive experience of screen and stage performing - go head to head in a prolonged interrogation. Most Star Trek two-parters suffer from a second part that fails to match the first. By pushing the interrogation entirely into the second part, "Chain of Command" avoids that problem. This is a fantastic episode.

It is impressive that the episodes does not pull its punches when it comes to Picard's experience. He is stripped naked and left to hang from his wrists overnight. He has torture implements surgically inserted into his body. Madred uses an electronic device to activate those implements again and again. He does not even demand intelligence after the first few rounds. Instead he shows Picard four piercing floodlights and demands to know how many there are. Picard sees that there are four. Madred insists that there are five. On they go, as Picard is progressively and brutally worn down. It is probably the most mature and disturbing episode that The Next Generation has ever done, from its blunt opening to the sad, unsettling denouement.

David Warner is an excellent actor, and brings his talents to Star Trek for a third time following roles as a human diplomat in The Final Frontier and the Klingon chancellor in The Undiscovered Country. I think this is his best role of the three. He took it at the last minute when the previous actor was unable to make the shoot. In truth he performs all of his lines from off-camera cue cards. You would not know it. He plays Madred as an arrogant, petty-minded bureaucrat; one whose handle on the situation begins to slip as Picard continues to resist his interrogations. There is a sense of play despite the torture: it's a game, and as Madred accidentally grows too comfortable with Picard, Picard is quick to take advantage and control over their relationship. With Stewart and Warner provided so much screentime to spar, it turns "Chain of Command, part II" into a genuine masterpiece of Star Trek.

While that is going on, Riker challenges Jellicoes authority on the Enterprise so hard that Jellicoe relieves him of duty. Data assumes duties as first officer while Jellicoe formulates and implements a plan to stop the Cardassians from invading a border system. When the time comes he needs the best pilot the Enterprise has - which turns out be Riker. In Riker's quarters they share a blunt and honest assessment of each other's abilities, and admit their deep mutual dislike of one another. Riker then agrees to undertake the assignment. There is something genuinely great in how the episode stops at Riker and Jellicoe admitting they hate one another. There is no resolution to this. There is no reconciliation, or the forming of a grudging respect. Jellicoe succeeds in his mission, Picard assumes command, and Jellicoe returns to the USS Cairo. Combined with the interrogation sequence it makes "Chain of Command, Part II" one of the most mature and realistic Star Trek episodes of all time. This is the seventh good episode out of 11, bringing Season 6's quality ratio up to 64 per cent.
Posted by Grant at 5:25 PM