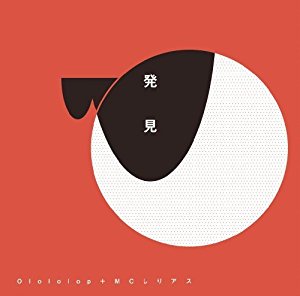 I find something rather wonderful about pop music produced in languages other than my own. It prevents me from engaging with the lyrics, since I have no ability to understand the words. Instead the vocals in any given tracks simply turn the singer's voice into another musical instrument. This seems to go double with hip hop, where the rhythm of an MC's voice essentially forms another layer of percussion. With the right musical backing it can sound positively hypnotic.

While in Taipei last October I bought a pile of North Asian independent rock and pop albums, and somewhere in the middle of the pile was Discovery (aka Hakken), a CD by Japanese electronic outfit Olololop and rapper MC Serious (Shiriashu). It is a stripped-back, staccato sort of an album, one that combines fairly minimal and experimental electronic beats with some very effective - and, to be, unintelligible, rapping. It's odd, but it's also highly addictive.

First and foremost it's worth noting that this is a pretty niche kind of music, and if you do not warm to rap or electronic music at the best of times there is literally no point in you tracking down or listening to this album. Secondly it's worth noting that even if you do enjoy a bit of electronica, this is very sparse and simple-sounding stuff. There's little in the way of an identifiable melody in most of the tracks, and a syncopated rhythm that can easily frustrate. Some of the songs work brilliantly. Some fall very flat for me. The one thing I will say about the album overall is that it's certainly interesting stuff. The song titles listed below are what Google thinks they are when translated from Japanese to English - I cannot speak to how accurate they actually are.

The album begins with the relatively short "God of Water" (水の神様), and it's an immediately difficult listen. It uses a chaotic sort of disjointed percussion, with no immediate sense of rhythm. While certainly valid as a kind of avant garde electronic, it is not exactly the most inviting of openings.

Thankfully things immediately right themselves with "No Family Name No Life" (NO 名字 NO LIFE). In this second track the rhythm falls into place with a great MC rapping over it. I have no idea what he is singing, of course, but it has an infectious sort of chopped-up energy to it. The pace continues in the third track, "Joy Monday's Joy Day" (ジョイ月ジョイ日のジョイ曜日). This track picks up a lot in its back third, as the various rhythms begin to fall into line with one another and lift the track to a new level. There is a very simple tone to this album: essentially percussion, rapping and a limited melody.

"Over Bose" (オーバーボーズ) is slower, and brings with it a kind of relentless, steady force. Much like the previous track, it builds from somewhere simple to somewhere pretty great in its later minutes. "Dub Fantasy" (ダブるファンタジー), on the other hand, sort of sticks at the same repetitive, slightly listless level for its entire duration. It is the least interesting track on the whole album. There is a sort of jaunty tone to "Rhythm Production Place for Rhythm" (リズムのリズムによるリズムのためのリズム制作所) that gives it a bit of a bounce. The album wraps up with "Spit Black Black Gum" (ブラックブラックガムを吐き出せ). There's a great groove to this one at first, but it rapidly degenerates into a stop-start mess of breaks and starts.

I enjoyed Discovery primarily because it challenged me. It's an odd, intriguing recording, the specific likes of which I probably won't encounter any time soon. I think it's good to be challenged. This album is a grower: each time I've listened to it, I've liked its idiosyncrasies even more.