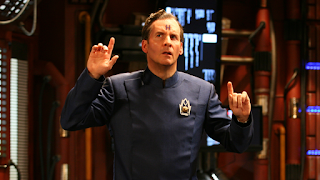 After an act of cowardice accidentally saves another starship, Rimmer (Chris Barrie) is promoted to lieutenant. Not only does he take the opportunity to lord it over his crewmates, he uses a captured bio-printer to replicate himself dozens of times to populate the whole of Red Dwarf with Rimmers.

As with all of the other episodes of Red Dwarf's 11th season, "Officer Rimmer" takes a bunch of old episodes and throws them into a blender. In this case the resulting mess feels deeply unpalatable - while there are a few early jokes that work incredibly well, the episode as a whole simply fails to work. You can only recycle these sorts of jokes so many times, and in the main Red Dwarf appears to have passed that limit some time ago.

Of course there is an audience - and more power to them - who enjoy the familiarity and routine of a comedy series that's happy to tread well-worn paths. There is a familiarity to them, and a sense of comfort. In that sense I am very open to the possibility that I am being a little too harsh in expecting Red Dwarf to provide originality and fresh material every episode. On the other hand, I do not personally think I am being unfair. It is four years since the previous season of Red Dwarf, and asking a series to develop just six fresh narratives after such a long break seems perfectly reasonable.

The episode is not entirely bad. Several gags work remarkably well, including Lister (Craig Charles) and the Cat (Danny John-Jules) trying to watch sport on the television and a bio-printer getting jammed midway through printing someone's head. The climax, however, stumbles badly, falling into yet another tedious episode of the regular cast sneaking around with big guns trying to kill a ridiculous monster.

I keep watching this series because I adore its first two seasons so much. Those seasons were a long time ago, however, and subsequent years have delivered less water with each trip back to the well. I am now four episodes into Season 11 and in all honesty I've fully enjoyed just one of them. The quality ratio slips again to 25 per cent.
Posted by Grant at 10:06 PM