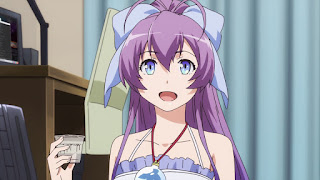 It is 17 April 2014, and time for the second episode of Nanana's Buried Treasure.

Jugo collects a small box that arrived without explanation via a little parachute into a back alley. Inside he finds a mysterious jewel. Nanana shows him that by holding it up to his eye he can see if people are lying to him or not. The following morning a young detective named Tensai and her assistant Daraku arrive on Jugo's doorstep to accuse him of being a thief. Later Jugo is invited to join the local Adventurer's Club - the same club Nanana led when she was murdered.

Goodness this series is a mess. Two episodes in - out of a total of 11 - I find myself struggling to understand precisely what Nanana's Buried Treasure is supposed to be about. A big problem is the characters. While the audience is still getting to know Jugo and Nanana, the series throws in Tensai and Daraku and then adds a bunch of members from the Adventurer's Club who all come too thick and fast to even remember their names. It's utterly confusing.

It is particularly strange because the two halves of this episode to an extent feel like they've been drawn from different shows. The first half is a farce-style comedy of errors in Jugo and Nanana's apartment. The second is an attempt by Jugo to pass a puzzle-box of a room to officially join the Adventurer's Club. I actually rather liked the second half. The first, riddled as it is with fan service, was not so enjoyable.

I recently lambasted Izetta: The Last Witch for its weird and egregious fan service, one incidence of which pretty much derailed an entire episode. Nanana's Buried Treasure is of course packed with liberal fan service, and yet I did not find it quite as annoying. I found myself thinking about why that was, particularly since when I watched the first episode of this series some months ago I found the fan service really annoying.

I think part of it comes from expectations. Pointless shots of scantily-clad female characters can really throw one out of a story if they come without context or warning. If they are openly demonstrated to be part of the show, whether good or bad, they don't stand out as much and therefore don't irritate as much either. There's also the realism issue: Izetta has much more grounded and serious characters, and so a sudden scene of them getting unpleasantly fondled really jumps out and shatters the drama in the rest of the episode. With Nanana's Buried Treasure there's a constant sort of flirtatious sense of play that suits the fan service much better. I'm still rolling my eyes at it constantly, but it feels part and parcel of the show.

There are two women in maid outfits here, yet one of them turns out to have male genitals. The episode is rather vague about whether Daraku is a cross-dressing cisgendered man or a transgendered woman. Tensai's gleeful announcement that Daraku is, in fact, 'a trap' is just confused and weirdly seedy.

I am relatively certain that Nanana's Buried Treasure is not a particularly good series, but I may give it another episode or two to see if the better quality elements of this episode expand and dominate or were a temporary aberration. At it stands, after two episodes the quality ratio is still idling at zero per cent.
Posted by Grant at 9:17 AM