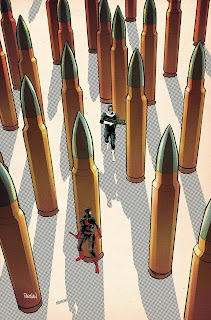 With long-running comic book characters, it is sometimes necessary to pause for an issue or two and make a new statement of intent: who is the character, and why do they do what it is they do each issue? That's pretty much the aim in Daredevil #16, from writer Charles Soule and artist Goran Sudzuka. It re-confirms why Matt Murdock does what he does, in an issue packed with history.

Matt's new sidekick Blindspot has lost his eyes, and ever since Matt has seemed suicidal. He's put a contract out on his own head, and after fighting off nearly every hired killer in New York he has finally come face to face with his arch-enemy Bullseye. The bulk of the issue takes place in the split-second it takes for the bullet to pass from Bullseye's rifle to Matt's head, as he sinks into flashbacks about whether or not to continue as Daredevil, and what possible purpose his life can have.

Tragedy. Violence. Catholicism. Guilt. These are all very common themes to Daredevil since it was re-imagined in the 1980s by Frank Miller. Soule revisits it all, and it the process freshens it up and re-emphasises its strengths. This is the best issue so far of Soule's run. It's simply a great comic book. (5/5)

Steel comes to Superman with a dying Lana Lang, sending them off on a missing to save her - unaware that some military unit is tracking their movements. At the same time Lois Lane finally decides to investigate the duplicate Clark Kent who has been working at the Daily Planet - and it seems the mystery is bigger than she had expected. It's good to see the series finally address the human Kent who's been running around for the past 15-odd issues. The art is solid, and the mystery is intriguing. (3/5)

Natasha breaks into a SHIELD data storage facility in the hope of preventing Recluse and her assassins from destroying it. She's almost too late - they're already in the building - and must use all of her skills to prevent them from blowing it up. I have gone hot and cold with this series, but this is an absolutely stunning issue. It boasts great action and panel layouts, and a driving momentum from the first page to the 'how can the heroine possibly win?' cliffhanger. When this creative team hit the right notes, they're exceptional. (4/5)

It is great to see IDW plug on with its growing range of Disney comic books: it's a set of characters that have always been well-suited to good all-ages comic books, and while the American comics may have died off many years ago they continue to thrive in Europe - particularly in Italy. Translating these European books for English-language audiences is a great thing. Donald Quest translates the characters into a sort of quirky space fantasy. The art feels a little rushed and scrappy, but there's plenty of action, some inventive storytelling techniques and a healthy sense of humour. It also gives a lot of time to Donald's nephews, which is to my mind always a good thing. (3/5)

After four one-shots introducing the key characters, Justice League of America Rebirth finally brings them together for the first time. There is a storm coming, and Batman needs a superhero team that can confront it. To that end he's assembled Black Canary, Killer Frost, Lobo, the Ray and the Atom to fix it. This issue is nicely illustrated, but does just assemble the team. After all of the build-up it feels a little anti-climactic. That said, it's a good team with a lot of potential. Hopefully the next issue picks up the pace a little. (3/5)
Posted by Grant at 7:19 AM