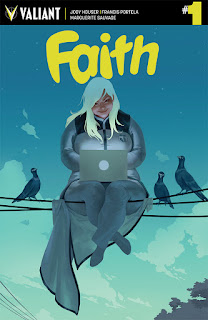 Faith Herbert was a member of the superhero team the Renegades, under the alias Zephyr. Now she's split up with the team and moved to Los Angeles. She has a new secret identity and hopes of establishing herself as the city's greatest new hero - assuming she doesn't bite off more than she can chew straight out of the gate.

Valiant do an outstanding and regularly overlooked job with their comic books. They employ great writers and brilliant artists, and tell some of the best superhero stories in America, and they absolutely do not get the attention or sales that they deserve.

Faith #1 is a perfect example. It's the beginning of a four-issue miniseries. It highlights a great character. Faith is a comic book geek turned comic book-style superhero. She is wide-eyed and optimistic, and desperate to help others and make a real impact. She also has a much fuller build than your average female superhero, and that makes her a visually distinct character as well as a really likeable one.

It's quite neat how the issue takes up comic book stereotypes and works them into new forms. Faith enthusiastically takes on a secret identity, not so much because she needs one but because that is what she thinks superheroes should do. She takes on a job as a journalist for pretty much the same reason, although as an aspiring writer in the 21st century that job mostly entails writing clickbait articles about disgraced celebrities. She dives in to fight crime wherever she finds it, but seems to mostly run into low-scale, almost embarrassing criminals - like people stealing puppies from a professional breeder. When the issue ends with the sudden discovery of a major criminal enterprise, it feels like she may be more than a little out of her depth. Getting back up to a winning position should make the next three issues a hell of a lot of fun.

The book is nicely illustrated by Francis Portela (Green Lantern), with strong colours by Andrew Dalhouse. On a few occasions Faith begins to fantasise about what her superhero life will bring, and those daydreams are neatly illustrated by Marguerite Sauvage (DC Comics Bombshells). Jody Hauser's script and dialogue are warm and funny. Altogether it's a really nice package.

Faith #1 hits comic book stores worldwide next Wednesday 27 January. Keep an eye out for it. It's a strong and distinctive start to a really fun book. (4/5)

Valiant. Written by Jody Hauser. Art by Francis Portela and Marguerite Sauvage. Colours by Andrew Dalhouse. A preview copy of this comic was provided by the publisher.
Posted by Grant at 8:51 AM