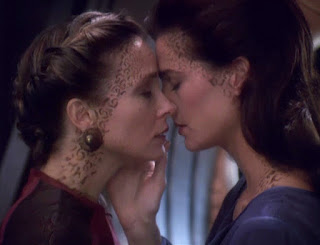 A Trill science team arrives at the station to begin tests to create the galaxy's first artificially created wormhole. The leader of the team is Lenara Kahn (Susanna Thompson), whose former host was once married to one of Dax's (Terry Farrell) former hosts. Trill society strictly forbids former spouses to reconnect in new bodies, yet as Dax and Kahn work together they begin to rekindle their old relationship - at great risk to them both.

First and foremost, it is important to emphasise that this episode is not about how it's bad to be a lesbian. Sure the episode involves two women who fall in love, and their fellow Trill are very quick to warn them to stop because it's unnatural and disgusting, and they risk being marginalised from society for having a love affair that the broader Trill society finds repugnant and gross, and they're two women kissing on screen, and in the end they separate because one of them decides that two women - I mean, two rejoined Trill - having sex is not worth society's scorn, but it is categorically not an attack of lesbians.

At the time the various members of the production were very quick to point this out (quotes all taken from the wonderful Memory Alpha). Producer Ira Steven Behr said: 'We're not doing a show about lesbians, we're doing a show about Trills.' Director Avery Brooks said: 'it's not about sex, or same gender or any of the above, even though, obviously, in our world, that's what people started to look at.' Of course that is what people started to look at. It's an episode in which two women fall in love, and conservative societal pressure forces them apart. That might be acceptable storytelling if it wasn't for the scenes of Dax's colleagues all having little 'ew this is weird' conversations, or Sisko (Avery Brooks) warning Dax that going ahead with a relationship will destroy her life. The production team can describe and defend their episode in any fashion they wish, but it will never erase the fact that - either by accident or design - they made an episode that tells its audience that two woman loving each other is wrong and will lead to disaster.

On top of that it is part of a lengthy pattern of behaviour. Star Trek's sequel series were notoriously conservative about sexuality. Only a few weeks ago I reviewed "The Host", the original Trill episode back in Star Trek: The Next Generation in which Dr Crusher (Gates McFadden) could happily love a Trill when its symbiont shifted into Will Riker (Jonathan Frakes) but not once it shifted into a woman. A later Next Generation episode saw Riker fall in love with a member of an androgynous species - only the role was prominently cast as a woman and her society observed strict taboos over differences in sexual orientation. In 2003 UPN ordered all of its drama productions to make an episode referencing HIV/AIDS in observance of World AIDS Day. Enterprise provided an episode, "Stigma", that managed to obliquely reference prejudice against HIV/AIDS while simultaneously making it clear that only Vulcan perverts can get the disease. On top of all of that, consider that in the entire 703 episode run of the Star Trek canon, not to mention 12 feature films, there is not a single openly homosexual character. The closest we ever get is the alternate Kira in Deep Space Nine's run of mirror universe episodes, and she is portrayed as not only bisexual but also decadent, promiscuous and morally corrupt.

At this stage any further review of "Rejoined" feels meaningless, because it is close to impossible to properly enjoy an episode that forms part of Star Trek's long-running refusal to accept issues of sex and gender diversity in its stories. The sad fact is that there's a lot to commend about this episode. I think Avery Brooks does a very strong job directing it, and I think that Terry Farrell does her best acting in the series so far. Guest performer Susanna Thompson does a remarkable job as well, working with a small amount of screen time to build a realistic and believable character the audience can care about. A lot of the dialogue and romance between Dax and Kahn is sensitively portrayed, and the episode's final moments are a beautifully composed emotional punch to the guts.

In the end, however, it is an episode about two women who fall in love, are told their love is morally wrong, and who stop their relationship as a result. That's basically not okay. We're five episodes into Season 4, and four episodes have been good. This is the one that was not.
Posted by Grant at 11:18 AM