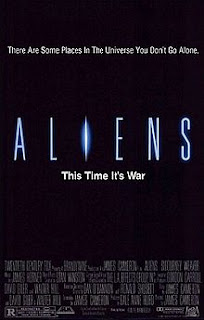 Decades after she escaped the alien and bedded down in hypersleep, the Nostromo's flight officer Ellen Ripley (Sigourney Weaver) is recovered and returned to Earth. At first nobody believes her story of a crashed alien spacecraft on the planet LV-426, or the deadly menace hidden inside. When a small terraforming colony on LV-426 loses contact, however, Ripley is convinced to accompany a unit of colonial marines back to the planet. They find the colony in disarray, the humans missing and the base infested with aliens.

Given the huge commercial and critical success of Ridley Scott's Alien, it does seem bizarre that it took 20th Century Fox seven years to pull together a sequel. While Sigourney Weaver returned to play Ripley, Scott did not return to direct - handing control over to the up-and-coming filmmaker James Cameron. Cameron, then riding on top of the success of his science fiction thriller The Terminator, both wrote and directed Aliens. It is one of the best film sequels ever made. It is enormously clever because it manages the remarkable feat of honouring its predecessor while changing its genre. Alien was a brilliant blend of science fiction and horror. Aliens blends science fiction and a Vietnam War film.

This allegorical treatment of Vietnam is not subtle. The colonial marines essentially resemble the imagery of American soldiers in Vietnam, albeit with a more gender-balanced representation. They are brash, over-confident and reckless. When Ripley attempts to explain the nature of the alien they are likely to encounter, they are positively bored - one even muttering derisively about going on 'another bug hunt'. Of course by the time they reach their first major confrontation - a mass ambush by a horde of aliens underneath the facility's nuclear reactor - they are overwhelmed and half-massacred. The remains of the unit concentrate purely on escaping LV-426 while they still have a chance of survival.

Despite presenting the marines overall in a fairly stereotypical fashion, Cameron gives each of them unexpectedly well-defined personalities. Even those who are seen fleetingly, and who get just a handful of lines before being taken by the aliens, are crisply outlined and given actual characterisation. The core cast of marines - effectively those who survive the disastrous first encounter - are even better delineated. Lieutenant Gorman (William Hope) is an inexperienced officer who presents an autocratic and measured attitude to his soldiers right up to the point when they start getting murdered by aliens. From that point he cracks and panics, and is forced to spend the rest of the film finding genuine resolve and courage to match the soldiers he has let down. That final approval comes, rather unexpectedly, from Private Vasquez (Jenette Goldstein), a muscular, rage-filled woman with a penchant for heavy and explosive weaponry.

The embarrassing over-confidence of the marines heading down to LV-426 is personified by Private Hudson (Bill Paxton). He struts and jokes his way around the place. He mocks and boasts. Once he barely survives the fact attack he pretty much falls to pieces like Gorman. In Hudson's specific case he becomes too terrified to act any more. Any action he undertakes for the rest of the film he does in a mad panic. In contrast to Hudson is Corporal Dwayne Hicks (Michael Biehn). He spends the first section of the film being remarkably quiet and softly spoken, allowing the louder and more obvious characters to take the spotlight. When Gorman is knocked out cold Hicks is momentarily advanced to a command position, and reluctantly starts dictating their collective response to the alien menace. It's a great performance by Biehn that requires a lot of understated work, and ultimately makes the character an immensely likeable and engaging one. Then again this film, like its predecessor, pretty much boasts wall-to-wall strong performances.

Assisting the marines are two other stand-out characters: the synthetic technician Bishop (Lance Henriksen) and the Weyland-Yutani corporate representative Carter Burke (Paul Reiser). Henriksen does a great job with Bishop. He seems to deliberately emulate Ian Holm's calm, unsettling performance as Ash in the original Alien, and that gives his character a wonderful effect. Upon meeting him Ripley immediately does not trust him, and because of the slightly eerie way he performs the character the audience does not necessarily trust him either. By the time it becomes clear he is a good-hearted man and a valuable asset to the escape plan, both Ripley and the audience grow to like and accept him. The beautiful part of that transition is that Henriksen doesn't change his performance style at all. Bishop never changes - we do. Almost as a contrast Burke begins as a trusted and comparatively likeable character, and ends as a traitorous and despised coward. It is a very strong performance by Paul Reiser, who gives his character a careful transition as Burke's plans to steal alien specimens away to Earth become clear. He begins in a very trustworthy manner. He ends very shrill and desperate.

That all pretty much covers the marine, but what about Ripley? There is a scene in the film's special edition that did not make it to the theatrical cut, in which Ripley - who's been frozen for almost 60 years - learns that the daughter she left behind on Earth grew old and died in her absence. It is a terrible shame that the scene was originally cut, because it helps to inform the rest of the movie. Ripley goes back to LV-426 not simply as a traumatised sole survivor but also as a grieving mother. When she arrives there she quickly rescues and forms a connected with Newt (Carrie Henn), a young girl who has survived the alien outbreak by hiding in ventilation ducts and service corridors. Newt's parents have been killed. She too is deeply traumatised. It is to my mind a remarkable achievement that in the middle of the military action film there is this quite beautiful story about a mother and a daughter finding each other in extreme circumstances, and allowing each other to move on with their lives together.

This storyline extends to the film's climax, in which Ripley climbs into a robot suit to wrestle the alien's enormous queen to save Newt's life. The queen is in a rage because in rescuing Newt from the LV-426 facility Ripley torched its entire nest and all of its alien children there. It is in its simplest form a fight between two mothers over their children - to me, given the genre and the time in which the film was made - that's rather remarkable. This may be a science fiction action movie about the Vietnam War, but it's about motherhood as well. Sigourney Weaver earned an Academy Award nomination for her performance here, one that was very well deserved. There is a marked progression in Ripley's character. Having already seen one crew be completely destroyed by an alien, she doesn't hesitate the second time around to take matters into her own hands. Ripley was excellent in Alien, but in Aliens she is remarkable. She pretty much cements herself as the best female protagonist in science fiction film history.

Ultimately I find Aliens a weirdly underrated movie. Moviegoers generally love it for its tense action scenes and beautiful production design, and they're right to do so - but there's a lot more going on in the script. It really deserves more praise for its thematic work, its richly drawn characters and its excellent dialogue. Between Alien and Aliens I do still prefer the earlier film, but to be honest I think that is a matter of genre and taste; Alien is a tremendous horror film, but at the same time Aliens is a tremendous action-thriller.