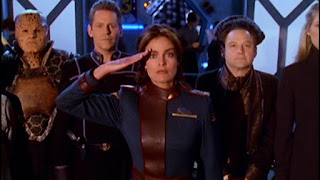 The final episode of Babylon 5, "Sleeping in Light", is really an epilogue to the series, so that pretty much leaves "Objects at Rest" to act as the final chapter. It is an odd episode, featuring a strange, bumpy storyline. It seems more interested in tying up a few final loose ends than it telling a proper story. The result is emotionally satisfying, but leaves a niggling concern in the back of the mind. Was this the very best way to tell this story?

The episode begins with Ta'lon (Marshall Teague) arriving on the station. Ta'lon was a Narn warrior introduced all the way back in Season 2, when he and Sheridan were captured and tested by alien abductors. He's since popped in and out of the series, generally as a confidante to G'Kar (Andreas Katsulas). Ta'lon discovers that G'Kar has personally selected him to be his successor as Narn ambassador to Babylon 5. It's a great set-up for an episode, but after a few opening scenes it does not actually go anywhere.

The same goes for a brief scene in which Franklin (Richard Biggs), who I honestly assumed had featured in his final scene in "Objects in Motion", offers his job to Dr Hobbs (Jennifer Balgobin). It took me a few moments to remember we had seen Hobbes before in "Interludes and Examinations" back in Season 3 - sadly she failed to make too strong an impression. Once again, the potential of an episode about a new staff member getting their head around a new role seems raised and then dropped.

When Sheridan and Delenn finally leave Babylon 5 for Minbar, there's a brief moment as they stare across space from a White Star bridge to the command and control deck of the station. Lined up at the C&C window is Captain Lochley (Tracy Scoggins), Zack (Jeff Conaway), Vir (Stephen Furst), Number One (Majorie Monaghan), Hobbs and Ta'lon. It's a neat touch, effectively showcasing Babylon 5: The Next Generation, and reassuring both Sheridan and the audience that despite everybody leaving lately the station and its work will go on. Part of me wonders if the only reason Ta'lon and Hobbs received their earlier scenes was so this specific shot could be lined up 15 minutes later. That's a shame, given how much padding there seemed to be in earlier episodes this season. I would liked to have seen more of them. Still, as it stands, this is an emotionally effective and satisfying farewell.

Things all go a little odd from there. The White Star suffers a coolant leak. Sheridan rushes to rescue a technician when the leak seals off that section of ship. Lennier arrives but, when finally given the opportunity to get Sheridan out of the picture, runs away and leaves him to die. Of course Sheridan soon escapes under his own steam, but a shamed and regretful Lennier steals a fighter and flees.

It all happens rather quickly, and it's a sequence with which I have several problems. Firstly, it seems to exist because it is Lennier's last chance to betray the Rangers as prophesised back in "The Day of the Dead". Back then, as related by Morden's ghost, it seemed a thing of significant portent. Trapping Sheridan for 60 seconds in a room full of coolant with no long-term consequences does not remotely fit the bill. It feels shoe-horned in to satisfy a narrative requirement before the series comes to an end. Secondly there is the problem that this entire story arc of Lennier falling in love with Delenn, pining for her, and abandoning his post serving her as a result, has never once felt convincing. It runs counter to the character's entire past in the series, and then odd, unexpected betrayal feels like the capstone on a run of poor writing choices.

Once on Minbar, Sheridan and Delenn are met by Emperor Londo - who has arrived to spontaneously give them a gift of an ancient Centauri urn, to be given to their child when he or she turns sixteen. The urn contains a keeper like the one that now manipulates Londo, and ties into the future visions Sheridan experienced back in "War Without End".

Londo's scenes don't quite work. Like everything else in this episode they feel rushed and awkward, and under-motivated. There is a moment when Delenn actually sees the keeper on Londo's shoulder, yet she does not appear to respond to it after the immediate moment and it is not mentioned again. Peter Jurasik does a good job of playing the semi-controlled Londo, but it all just feels too fast and haphazard to be properly engaging.

At the episode's end Sheridan, realising that by the time his child comes of age at 21 years he will have died, records a message to them. It is the episode's best scene by far, as Sheridan slowly delivers out his advice and well wishes against a montage of the Babylon 5 characters, all moving on to new lives and fresh futures. J. Michael Straczynski always excelled at monologues, and as an end to the series it works wonderfully. In fact it is so good a scene that it recovers a lot of ground lost by the chain of oddly truncated scenes that came before it. This was the final episode of Babylon 5 ever recorded - the actual finale was recorded a year in advance - and to be honest I really felt it. It's a bittersweet ending.