Babylon 5: "And All My Dreams, Torn Asunder" 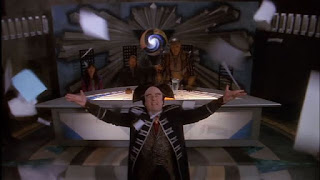 The Interstellar Alliance learns of the Centauri attacks on their cargo ships, leading the Alliance to declare war on the Centauri Republic. Londo (Peter Jurasik) is recalled back to Centauri Prime, where he and G'Kar (Andreas Katsulas) are imprisoned.

Credit where it's due, when the time comes from J. Michael Stracyznski to write a stirring, emotive speech, he usually does a pretty good job of it. This is the sort of episode we used to see all the time in Seasons 3 and 4, and it's sad that it's taken 16 episodes for Season 5 to finally reach this point. The fragile peace formed in the wake of the Shadow War has been shattered. An all-new war has taken its place. No one is happy about it, and it's clear that many people are about to die.

The episode's early scenes are masterful, with Londo and Vir (Stephen Furst) forced to wait in their quarters while the Alliance Council sits in session without them. Various characters provide a useful recap of what Sheridan's team discovered, and how it came to prove that the Centauri Alliance has betrayed their sister systems. Londo, of course, still does not believe it can be true, but when the time comes to face the Council he does so defiantly and in a stirring, uncompromising style. Peter Jurasik does a great job with it, and Straczynski's dialoue does not let him down.

Sheridan (Bruce Boxleitner) finally gets some proper character work and plot to work through. He has been very poorly served throughout Season 5, but here he's wedged between a desperate wish to preserve the peace he created and an obligation to obey the will of the Council. The last thing he wants is a war, and a war is precisely what he is given. His frustration finally boils over in session, when he's as good as screaming at his fellow delegates: accepting their wishes and damning them all to hell at the same time. It's great drama.

Garibaldi's alcoholism finally causes him to make a catastrophic error, falling asleep and failing to warn of an impending Centauri attack on a fleet of cargo vessels. It's the sort of plot contrivance that sets one's teeth on edge - why was he the only person left to watch for approaching Centauri ships? Why did nobody else think to look? It's the sort of weak story beat that exists because Garibaldi needs to make a terrible mistake, and it's easily this episode's weakest aspect.

Londo returns to Centauri Prime, and when the government - now on a firm war footing - demands to imprison G'Kar for being a member of the Alliance's advisory council, Londo insists of going wherever G'Kar goes. Which is prison. It's momentarily amusing, but it does beggar belief that hours after heading to war a government would imprison its prime minister without arrest or charge.

Ultimately this episode goes a pretty long way with portentious dialogue and defiant speeches, but it stops short of matching earlier episodes of this type. It all feels very slightly detached, and a little too small in scale. This is possibly budget-based, but it's unfortunate. We're approaching the end of the final season of a serialised story and I desperately want to experience a climax. I'm simply not quite getting one.

It is also odd that among all of the intrigue, the combat and the strife, Captain Lochley (Tracy Scoggins) is nowhere to be seen. She commands the station, yet doesn't participate in any meetings or briefings and isn't seen to consult with anybody. She hasn't been seen since Byron died - that's an absence of five episodes and counting. It's deeply weird.

This may be a faulty episode, and something of a shadow (no pun intended) of former series glories, but at least it is entertaining. We're 16 episodes into the season, and eight episodes have been good. The quality ratio rises again to precisely 50 per cent.
Posted by Grant at 7:51 AM