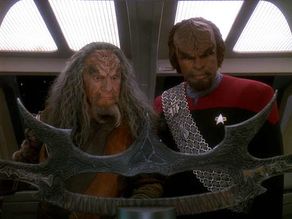 It's 20 November 1995, and time for another episode of Star Trek: Deep Space Nine.

The ageing Klingon master Kor (John Colicos) teams up with Dax (Terry Farrell) and Worf (Michael Dorn) in a search for the fabled Sword of Kahless: the bat'leth originally wielded by the founder of the Klingon Empire. Their search is interrupted by the arrival of the disgraced son of Duras, Toral (Rick Pasqualone), and even when they find the sword they may be unable to keep it.

"The Sword of Kahless" is another attempt to integrate Worf into the regular cast of Deep Space Nine, by providing a sequel to the earlier episode "Blood Oath". That episode reunited the three Klingon commanders from the original 1960s Star Trek, killing two of them off in the process. This one brings back the sole survivor, and sends him on a quest with Dax and Worf. The rest of the regular cast barely get a look-in.

While the idea of a quest narrative pairing Worf up with one of the original Star Trek Klingons has a huge amount of merit, the execution entirely lets it down. This is not a good episode. The direction (by LeVar Burton) is hampered by excessive use of the traditional dark cave sets, and the script is muddled and packed with stereotypes.

It's biggest problem is how it treats Kor and Worf. Once they get their hands on the fabled sword, they immediately begin to fight over it. They undermine one another, drop insults at one another's feet, and eventually get to the point of actively plotting one another's murder. At first it seems that the sword itself is emanating some sort of influence upon them, but by the episode's end it is clear (and interviews with the writers has confirmed this) that Worf and Kor simply go blind with ambition when they get close to a chance for glory and favour within the Empire. That does not sit will with the characters at all. In Worf's case it feels actively destructive, turning him from a stoic but noble figure into the sort of man who would plot an elderly rival's murder for personal advantage. So purely in terms of characterisation it is a disaster, and possibly the worst episode for Worf ever made.

The rest of the episode does little to compensate. Toral returns of course, but for the audience it has been several years since he was last referenced - and on another series - and to make things even more inaccessible he is played by an entirely different actor. Once introduced he barely gets to do anything at all.

"The Sword of Kahless" is a colossal misfire and best avoided. With it, Season 4 reaches its eighth episode, of which six have been good. The quality ratio drops to 75 per cent.
Posted by Grant at 7:30 AM