Babylon 5: "Meditations on the Abyss" 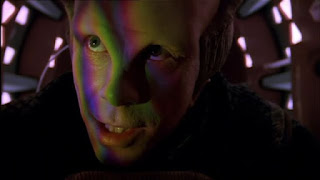 Lennier (Bill Mumy) returns to the station in secret to meet with Delenn (Mira Furlan) and receive a top secret mission: to join a White Star training mission near Centauri space, and use the opportunity to find evidence that it is the Centauri Republic whose attacks are destabilising the Alliance.

It feels like quite a long time since we last saw Lennier, forlorn and alone, abandoning Delenn's service because she was always going to love Sheridan (Bruce Boxleitner) instead, and haunted by the ghost of Morden's claims that he will one day betray the Rangers. He makes a pretty dramatic return here: darker, facially scarred, and a lot more serious and grim than we've ever seen him before. While he is given an important mission at the episode's outset he does not actually fulfil in in this episode. Instead we get to see his experiences on the training vessel: basically a sort of Minbari Top Gun in space.

It's questionable how much of this episode the audience actually needs to see. Lennier's experiences in training are generally watchable, although like much of Babylon 5 they slip pretty readily into stereotypes. The gruff but kindly captain gets a look-in, as does the underconfident rookie who can't handle the pressure of military discipline. I am willing to guess that a future plot development requires Lennier to be out in the field near Centauri space, which is why J. Michael Straczynski has moved him there like a chess piece. What I am not willing to accept is that his move there couldn't happen in the same episode in which the narrative purpose for the relocation is revealed.

Back on the station London (Peter Jurasik) informs Vir (Stephen Furst) that he is to become the new Centauri ambassador to the Interstellar Alliance. At the same time he and Vir discover a Drazi listening device hidden in their chambers: responding to this attempt at espionage and overcoming Vir's underconfidence in his new role turn out to have the same solution. It's amusing enough, but I think it would be lying to pretend these scenes are not a little trite and weak.

That pretty much leaves just G'Kar (Andreas Katsulas) struggling with his new role as spiritual leader to the Narn. There are some great scenes - the best of the episode - in which Dr Franklin (Richard Biggs) reveals that he too has read G'Kar's book, and accompanies G'Kar to a session with aspiring Narn spiritualists. It manages to be funnier than the Londo/Vir scenes, and push characters forward more than the Lennier scenes. It's just a pity that there is not enough here to redeem the whole episode.

"Meditations on the Abyss" is simply too dull an episode with which to bother. Like much of the season it feels like filler: as if the series only has plot for 10 episodes, but a production contract to make 22. It ends feeling more like a chore than like entertainment. We are now 14 episodes into the season, and seven have been at least moderately enjoyable. The quality ratio drops back to 50 per cent.
Posted by Grant at 11:34 AM