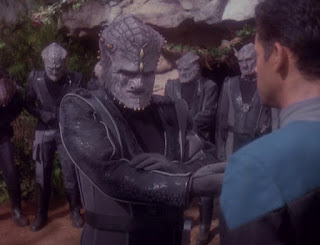 Bashir (Alexander Siddig) and O'Brien (Colm Meaney) crash-land on a planet in the Gamma Quadrant, and meet a group of Jem'Hadar attempting to escape from the Dominion. On the station, Worf (Michael Dorn) struggles to accept the manner in which Odo (Rene Auberjonois) undertakes his duties as security chief.

"Hippocratic Oath" is mostly very good, taking two characters who are close friends and pushing them into a situation where they're forced to take diametrically opposed positions to one another. There is a lot of dramatic potential there, and to a large degree that potential is fulfilled. The other side of the episode is less successful, with Worf struggling to adapt to life on the station. This subplot takes an obvious idea, and runs with it in an obvious manner: hardly must-see television.

The friendship between O'Brien and Bashir is one of my favourite elements of Deep Space Nine. It's easy to forget by this point in the series that in the first season O'Brien visibly hated Bashir. The close relationship they share by the beginning of Season 4 is something that developed over time, and as a result of that organic growth it feels important to the audience. Straining that friendship in that manner than "Hippocratic Oath" does is very effective.

The group of Jem'Hadar, commanded by the stoic Goran'Agar (Scott MacDonald), have escaped the Dominion as a seemingly unprecedented act of rebellion. They are running out of ketracel white, the drug that they require to survive. Goran'Agar has become immune to the drug dependency, and upon learning Bashir is a Doctor he demands the doctor work to cure the other Jem'Hadar of their dependency as well. For Bashir it's a case of caring for sick aliens and hopefully setting off a larger-scale rebellion within the Dominion. For O'Brien helping the Jem'Hadar is tantamount to aiding the enemy. As a result the two men are quickly at loggerheads over the issue.

The beauty of the situation is that both men's positions grow naturally from their own experiences. As a doctor Bashir is compelled to help the sick and wounded no matter who they are or what they have done. As a war veteran O'Brien is quick to see a potential threat when it arrives. A group of Jem'Hadar freed from the Dominion's control might rebel. On the other hand they might run amok across the galaxy killing everyone they encounter.

The episode's end is remarkably open-ended and downbeat. O'Brien betrays Bashir and destroys his medical research. Goran'Agar lets them escape; there's no point in forcing them to remain because his soldiers are rebelling against him anyway and he will be dead within hours anyway. Shortly afterwards his drug-dependent troops will die as well. O'Brien and Bashir's friendship has taken a tremendous battering, since Bashir knows O'Brien has effectively murdered the entire squad. That's where the episode leaves us. It does not even bother to reveal why Goran'Agar was immune to the drug and his comrades were not. It's very effective. Whether it is Lisa Klink's teleplay or Rene Auberjonois' direction, it cleverly gives us just enough material to feel resolved and then gets off the screen as quickly as possible.

It's not the best storyline. For one thing it really makes Worf seem like a bit of a jerk. He may have only have been in this series for three episodes, but of course as viewers we had already watched him through seven seasons of The Next Generation and a feature film. The Worf from before Deep Space Nine would never have been this unprofessional, or so bluntly disrespectful of his colleagues. He is even warned to back away by his commanding officer, and then actively ignores that order. The only thing that partly salvages this storyline is Odo's consistent and understandable resentment of yet another Starfleet officer coming in and questioning his methods.

While the Worf-Odo subplot is not very good, it is outweighed by the strong character work in the other half of the episode. It's all enough to make "Hippocratic Oath" a solid and enjoyable story, and keeps Season 4's quality ratio at 100 per cent so far. Three episodes down, 22 to go.
Posted by Grant at 9:01 AM