Babylon 5: "The Wheel of Fire" 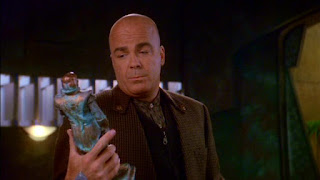 Garibaldi's (Jerry Doyle) alcoholism finally catches up with him, leading to his suspension from duty and a new connection with Captain Lochley (Tracy Scoggins). G'Kar (Andreas Katsulas) returns to the station to find his position as the Narn's spiritual leader greatly enhanced. The Earth Alliance calls for the arrest of Lyta Alexander (Patricia Tallman) - but she is not willing to go down easily. Sheridan (Bruce Boxleitner) and Delenn (Mira Furlan) receive unexpected news.

After the climax of the Centauri War storyline, there was always going to be a challenge for the next episode to sustain too much drama or suspense. "The Wheel of Fire" is an absolute curate's egg. Garibaldi's addiction to alcohol continues to be an excuse for a lot of awful clichés and stereotypes. G'Kar's ascension to unwilling messiah is moving too slowly to remain engaging. The revelation that hits Sheridan and Delenn is sweet but insubstantial. That only really leaves Lyta's story to sustain the episode, and while it does manage to an extent it's a difficult, thorny kind of a story arc that I am not sure how I am enjoying.

Here's the thing: I initially didn't like Lyta. She made a fairly poor impression all the way back in the original Babylon 5 TV movie, and when she returned to the series it took quite a few episodes for Tallman's performance to settle down and start convincing. By the end of Season 4 I thought she was great: the character was being utilised well, and in interesting ways, and Tallman had really picked up her game performance-wise. While the acting is still there - she's great in this episode - the character has been pushed into a really unlikeable place over the course of Season 5. Now she's surly and ill-tempered, she has weirdly decided her friends are all just using her for their own advantage, and she's segued from good-hearted and heroic telepath to terrorist mastermind and interplanetary criminal.

There's an absolute knockout of a scene midway through the episode, when Lochley and Zack Allen (Jeff Conaway) arrive at a crowded cafe to arrest Lyta only for Lyta to take over the minds of every single person there. It's a terrifying scene, and a great moment of high drama. While it mostly works brilliantly, and certainly Sheridan's entrance to the scene is wonderful, it does make one suddenly realise that Lyta has become a horrible person. It's hard to care about a character when they're suddenly no longer worth liking. She's made a not-entirely-convincing segue from heroine to zealot, and it's not a segue that I am enjoying.

It's a surprise to see Lochley in the episode, not because she doesn't fit here - she does - but because this is only her second appearance since Byron died midway through the season. The character was introduced with a lot of import, and she's been barely registering in the series since. It it difficult to see why the character was needed at all, and certainly not as a fully credit regular cast member. Tracy Scoggins remains solid in the role, but she is being woefully under-used.

As for the other threads: G'Kar's dilemma over whether or not to return to Narn or remain on the station is solidly played but seems to eager to slide into humour; Garibaldi's alcoholism storyline is just really droning on without any sign of ending or becoming interesting; Delenn's pregnancy is a nice moment, but only really adds a few scenes to the episode. There is a commendable effort late in the episode to tie Garibaldi, G'Kar and Lyta's stories together, but it all hinges on the idea that the Earth government - which wants Lyta arrested for terrorism-related charges - would so easily let go of the idea of capturing her. I didn't buy it.

All up this episode simply doesn't hang together too well. We are 19 episodes into Season 5, of which 10 have been good or better. That pulls the quality ratio down to 53 per cent.
Posted by Grant at 5:36 PM