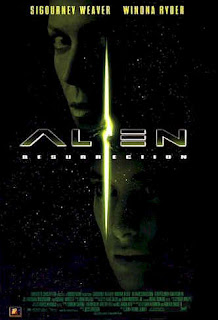 200 years after her death of Fury-161 Ellen Ripley (Sigourney Weaver) is cloned by the United Systems Military so that they can extract the developing Alien queen inside her chest. When the USM experiments fail, and Aliens break out across the massive medical ship the Auriga, Ripley joins forces with a band of mercenaries to escape the ship and save the human race from an Alien outbreak.

Then it all came crashing down. Alien Resurrection is a colossal misfire of a film. None of it fits well together. None of it works. Even the elements that should work fail to do so because they contrast too uncomfortably with the other parts of the film. It pairs a writer who built his reputation on a particular brand of self-aware sass and snark with a director who built his on strange, eerily disturbing and deliberately absurd tones and imagery. Like all films Alien Resurrection has its fans, but their affection for the film is simply not one that I can completely understand. To me this is not an under-appreciated masterpiece, or a thought-provoking extension of the Alien concept. It is just a bad film: badly written, quite poorly directed, and wholly and unqualifiably unnecessary.

It is worth considering, as a starting point, just how superfluous Alien Resurrection is. Alien³ was a deliberate closing of the book on the saga. The Aliens were finally destroyed for good, and more importantly Ripley died in making that extinction happen. There was always strong potential for further Alien films, pitting them against new characters and new situations, but there was definitely no great potential for more films starring Sigourney Weaver as Ripley. In order to bring her back into the story the film essentially wraps itself in a knot of clones and bad science. Ripley is cloned from a blood sample, yet the sample somehow brings back the Alien embryo that was inside her when she died. It also makes the embryo partly human, and the re-created Ripley partly Alien. She also manages to retain quite a lot of her original body's memories. How is that all possible? By a screenplay that waggles its fingers and speaks in technobabble. We expect silly nonsensical science from a lot of science fiction - particularly from television shows like Star Trek and its various spin-offs. We have never previously received it from an Alien film.

At any rate at the other side of all of the technobabble is a new half-Alien Ripley. She's a more muscular, much more confident character. She now talks in witty quips and snarky comments. Weaver performs the character well, but it is a strange new version of the character that pushes her away from her pragmatic, working class roots.

The film's supporting cast is largely filled with rather decent actors: Winona Ryder, Ron Perlman, Michael Wincott, Dan Hedaya, Brad Dourif, Dominique Pinon and so on. It's disappointing none of them get characters worthy of their talents. What they do mostly get are, like Ripley, a lot of witty quips and snarky comments. This is Joss Whedon's Alien, a vision of the franchise that involves a lot of self-aware dialogue and funny lines, and it causes the film a lot of problems. While the three preceding films changed a lot - the characters, the settings, even the genre - the one thing that was sustained throughout all three was the tone. Suddenly Whedon is straining to redirect a freight train off the rails, and thanks to a lot of screenwriting effort he not so much redirects the film as derail it. Based on how it manages things here, Alien is not a series that can cope with self-mockery.

The plot is reasonably simple: the USM attempt to breed themselves a batch of Aliens, those Aliens escape, the Auriga automatically re-directs itself towards Earth, and Ripley and her new-found companions have to stop the ship and get away before they're all killed and Earth is wiped out by the Aliens. It is in the details that it all seems to fall apart. The breeding cycle of the Aliens from egg to facehugger to chestburster to marauding drone all feels completely out of whack. Things that should take days seem to take minutes. Then there is the issue of the Auriga's size: it's a massive mile-long juggernaut with an apparent crew of about forty people. When it turns out to be too late to stop the ship, Ripley and Call (Winona Ryder) instead choose to crash it. The problem with this plan is that it's a mile-long spaceship. They might avert the Alien catastrophe, but they do so by presumably wiping out all life on Earth.

Many of the plot beats seem to occur because someone thought they might be cool, rather than as a logical extension of the story. At one point the characters need to swim through a flooded kitchen area to escape, not because there's a solid reason for it but because it seems like a neat concept for an action scene. In another scene a character dies with an Alien bursting from his chest - but not before he manages to kill the villain by holding their head in front of his chest in an act of ludicrous super-human strength. The climax introduces a half-Alien, half-human hybrid monster, something that has a fair bit of premise. Sadly the design work completely lets it down, and the manner in which this hybrid dies beggars belief.

As director Jean-Pierre Jeunet brings some nice visual imagery from time to time. There is a series of shots showing Ripley being taken by Aliens to their queen that is among the most striking stuff of the whole Alien series. Another sequence involves Ripley discovering earlier attempts at cloning her in a lab, which is remarkably effective until Whedon cannot resist ending it on a poorly-placed joke. On the other hand Jeunet proves himself almost entirely incapable of shooting action: so much of the film is broken down into odd stop-start staccato shots, the actors giving weird exaggerated expressions of fear and horror, and the camera lingering just that half-second too long in every case, making it all seem false and staged.

That is, in fact, Alien Resurrection's most crippling flaw. It feels staged. The other three films had people sharing conversations in lived-in places. Resurrection visibly has characters - often caricatures - sharing dialogue on sets. The artificiality of the set design and cinematography, and the fairly weak CGI used to render many of the Aliens, bring the film to the brink of failure. Joss Whedon's incredibly self-conscious screenplay forcibly kicks it over the edge. Hilariously the film ends in the most open-ended manner of the four, as if its makers were so certain they would all be back in a year or two to present the further adventures of clone Ripley and robot Call. They were not. It would be another seven years before the Aliens would return - this time facing off against the Predators.