Due to shipping accident or an intentional attempt to boost the week's market share, Marvel released both Star Wars #14 and Darth Vader #15 to comic shops simultaneously this week. Together they wrap up the six-issue "Vader Down" crossover that they have been running. 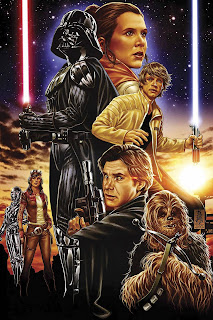 In the end it's a masterful conclusion. I complained last week that Chewbacca #5 offered a truncated and unsatisfying climax to that miniseries, before ending with an overly-long and rather tedious epilogue. That simply isn't the case here. The action continues right up to the final pages, and Kieron Gillen offers a two-page final scene that actually packs many times the punch of Chewbacca's in about a fifth of the pages.

These final two issues pack a lot of fighting into them. Vader versus Leia, Han and Chewie versus the Wookiee bounty hunter Krrsantan, Vader versus the Mon Calamari cyborg Karbin, Luke versus Stormtroopers, villainous droids BT-1 and Triple-O versus Stormtroopers, Aphra versus Leia, Krrsantan versus C-3PO. It just keeps piling higher and higher, becoming more and more ridicuous yet more and more hilariously entertaining at the same time. It's plotted and scripted so consistently that you really can't tell that Jason Aaron wrote one issue and Kieron Gillen the other. Mike Deodato's slightly gritty artwork on Star Wars #14 is impressive, but I remain more enamoured with Salvador Larroca's work in Darth Vader #15. He and Gillen make a sensational team.

Altogether this has been a fantastic little event storyline that not only manages to be a fan-pleasing meet-up of heroes and villains but also a genuine step forward in both book's ongoing narratives. It feels like an event that matters, and one that didn't require having read both books beforehand to enjoy. (5/5)

Under the cut: reviews of Action Comics, Giant Days and The Sheriff of Babylon.

Right off the bat this comic gets a fail from me on principle. I can't stand these multi-comic crossovers favoured by DC that require me to read Superman Annual, Action Comics and Superman/Wonder Woman just to get the complete story. As a self-contained issue this comic simply doesn't work, and what's worse anybody who didn't read Superman has missed out on critical plot information that follows months of regular issues in Action Comics. In effect it wastes that reader's money. It would be forgivable if "Savage Dawn" was a particularly gripping storyline, but to be honest it simply isn't that interesting. It might be about time to drop Action Comics from the pull list. (1/5)

First and foremost, I am really sad that the tile-based board game based on ER Season 7 referenced in this issue does not exist. I demand that somebody create it. This is a great issue, packed with humour, as Esther's high school friend Big Lindsay arrives on a 48 hour break to tear up her life and party without mercy. The thing that really makes this comic work is the characters. They're distinctive, yet all immensely likeable. I'm also slowly warming to Max Sarin's artwork. Since he's come onto the book I've struggled to like his slightly altered take on the characters, but it's feeling more natural now - probably just with familiarity. (3/5)

The Sheriff of Babylon #2

American military contractor Chris Henry meets with an Iraqi police official in the hopes he may help reunite a murdered man's body with his family. They soon run into trouble in one of the more dangerous corners of Baghdad. The Sheriff of Babylon is a tense, bluntly realistic thriller set in the aftermath of the Iraq War. Writer Tom King is a veteran of that war, and visibly brings a lot of fine detail and atmosphere to this stunning eight-issue miniseries. Mitch Gerads' artwork suits the realistic, gritty tone perfectly. This is an exceptional comic book and with two outstanding issues in a row it's shot to the top of my pull list. It's a classic crime comic in the making. (5/5)
Posted by Grant at 5:59 PM