Star Trek: The Next Generation: Season 4 in Review 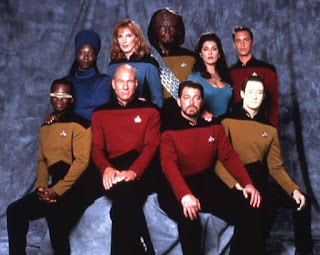 The conventional wisdom is that Star Trek: The Next Generation was a pretty shaky series for its first two years, but 'got good' with its third season. A rewatch of those three seasons showed that assessment to be slightly inaccurate: Season 3 does indeed get much, much better, but it's a transition that takes it much of that season to make. As a result Season 4 is really the first year of the series to be running at a fully superior quality, and that easily makes it the best year for the series thus far.

It's also the year that finally saw the production successfully convince Paramount to let it tell proper ongoing stories. The episodes are suddenly less self-contained. Worf's discommendation and the near-collapse of the Klingon Empire are threaded throughout the series. Picard's traumatic violation at the hands of the Borg gets an entire episode to deal with its aftermath, and it is still a plot point towards the end of the year in "The Drumhead".

Put simply, Season 4 is the first year of the series that actually feels like what we think of when we remember it. This is Star Trek: The Next Generation, fully shaken free from its origins as a sequel and well established as a major American television drama in its own right.

The season features its last major cast change for the duration of the whole series: the departure of Wesley Crusher (Wil Wheaton) at the end of "Final Mission". While he returns to the series for three more guest appearances, this was it for The Next Generation's most contentious character. It honestly felt like an inevitable departure. Wil Wheaton wanted some time off to take on some feature film work, but executive producer Rick Berman held him very close to his contract and forced him to stay with the series - even if he didn't actually have any scenes in a particular episode. At the same time the writer's room demonstrably resented having the character there at all - he was rarely used in any significant way, and even then they rarely used him well. Altogether it is probably for the best of the series that the character departed, although I will never stop feeling bad for Wheaton about it.

One major thing that strikes me about the season is how few genuinely bad episodes there were. As far as I make out they managed to scrape through the year with only two particularly egregious misfires - "Devil's Due" and "Night Terrors" - and the remaining poor episodes were either just really mediocre or good ideas broken by a specific critical flaw - like the creepy "Galaxy's Child". By comparison there were plenty of good episodes, and a higher than expected number of great ones.

If you're keen to see the season at its absolute best, these are the five episodes (in broadcast order) I would single out for you to go and watch:


If, on the other hand, you want to specifically see the season at its worst, these are the five episodes I think disappointed or irritated me the most: