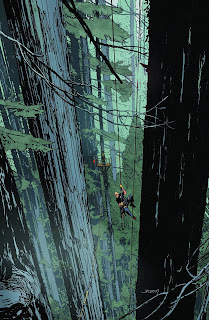 The Massive was a great post-apocalyptic comic book series that followed the environmental activist group Ninth Wave as they chased after their missing ship the Massive across the flooded remnants of the Earth. The Massive: Ninth Wave is a six-issue miniseries set prior to the events of the main comic book, and reunites writer Brian Wood and artist Garry Brown. I am loathe to describe it as a prequel, but it doesn't really act like one. Instead it is a series of self-contained stories showcasing what Ninth Wave did before the world got turned upside down.

They act as vignettes, stripped down to tell the bare minimum of story to get its point across. There is plenty of ellipsis going on: Wood's scripts are deliberately sparse, and point to the ending rather than openly show it. It creates a really sharp narrative style. Garry Brown's artwork continues to impress, and is about a sharp and to the point as the script. There's not a great amount of dialogue; the story does not really need it.

When Ninth Wave was announced I was concerned it was going to be a superfluous cash-in. Instead it's an excuse to tell some exceptionally solid, direct story vignettes. Any aspiring comic book writer could benefit enormously from following its lead. (5/5)

Under the cut: reviews of Doctor Who, Gotham Academy, Invader Zim and The Mighty Thor.

Doctor Who: The Eighth Doctor #3

The Doctor and Josie finally reach 19th century Edinburgh, where a stage magician named Silversmith has a magical trick that's too good to be an illusion. This is another done-in-one storyline, which I think is actually hurting the comic to an extent. It all feels very rushed and cursory, and would benefit enormously from at least another issue to flesh out the details and give the characters room to breath. There's also a weird final page - the art is not clear enough to make it a disturbing cliffhanger or just a witty final quip illustrated in a funny way. That kind of took the wind of the sails a bit. (2/5)


Gotham Academy has been a fun all-ages book for just over a year now. It's based at the prestigious titular school, where strange Scooby Doo-esque shenanigans are always occurring and where the students are constantly getting into scrapes and running into random Batman supporting characters. For this third story arc writer Brenden Fletcher is going for something really different: essentially a series of short comic stories relating funny events in the recent school year. This is an excuse to give a range of writers and artists a shot at playing with the Gotham Academy cast, including Derek Fridolfs, Katie Cook, Dustin Nguyen and Hope Larson. It's a great idea, and what's more it's a really fun, breezy read. (4/5)

Since its launch Invader Zim has been a great encore for the cult animated series, featuring story and art by the same writers and artists who contributed to the original show. This one-off issues hands the reins over to writer/artist K.C. Green. It's actually a pretty phenomenal idea, giving a distinctive independent creator to freedom to play with the characters and do their own take on the property. In this case it means artwork that's a little cuter than Jhonen Vasquez's iconic designs, but a script that is a little bit more adult and gross than what you would have seen in the original cartoon. I liked it. (3/5)

Check the half-page close-up of Loki's face on page 3. In yet another case of Marvel Studios now leading Marvel Comics, Loki is a dead ringer for film actor Tom Hiddleston. It's not a surprise, I suppose, give how popular Hiddleston has been in the role, but it also seems to show a lack of inspiration. I'd much rather the comics keep their own Loki and leave Hiddleston in live-action only. This issue depicts the first fight between Thor - as played by Jane Foster - and Loki, and while it's perhaps a little too slow (really, almost the entire issue is one conversation and fight) it is well written and nicely illustrated. This comic still hasn't quite managed to get its rhythm going, but it's constantly showing promise. (3/5)
Posted by Grant at 10:21 AM