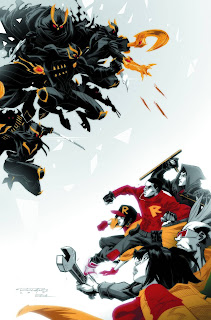 Praise be to DC Comics, for they have finally managed to produce a really good comic book crossover again. I honestly can't remember the last one I really enjoyed - possibly Final Crisis, but even that got a little confused and messy towards the end. By contrast Robin War has been a great storyline, bringing together Dick Grayson, Tim Drake, Jason Todd, Damian Wayne and the cast of We Are Robin for one big city-threatening fight against the Court of Owls.

The final instalment of the saga comes as Robin War #2, at an extra length and with an extra price (US$4.99). The story by Tom King is fast-paced, dramatic and allows for each character to get their final moment in the sun. It also manages a nice bait-and-switch towards the end, and leads into a conclusion that works for this story while throwing one of the regular Bat-books into a whole new direction. It's the kind of event storyline I like: it uses multiple elements from different books, teases them into an intriguing new pattern and gets out with both a thrilling climax and fresh narrative threads to inspire future stories down the line.

If I have a criticism it's the art: clearly DC were insistent on hitting its publication deadline come hell or high water, because there's a near record number of pencillers, inkers and colourists in the credits to bring this book over the line. It winds up giving everything a slightly inconsistent, 'jumpy' look that works against King's script. It's a bit of a shame. I'd have been happy to wait another month or so if it meant getting something more consistent.(4/5)

Under the cut: reviews of Batman and Robin Eternal, Gutter Magic and Rebels.

The story jumps continents this week, abandoning Dick, Cass and Harper in favour of following Tim and Jason as they infiltrate the Order of St Dumas to learn its links with Mother. Sadly the switch comes with a moderate jump of quality as well. Recent issues scripted by James Tynion IV have been particularly strong and engaging - this new issue by Lanzing and Kelly isn't half as effective. It's not bad by any stretch, but when all is said and done it is a pretty generic superhero comic. Azrael returns of course; I am still uncertain if he was a character worth bringing into the New 52. (2/5)

Gutter Magic is a new four-issue miniseries depicting an alternative urban fantasy universe where World War II was won not with bombs but with magic. This story begins a century after that, and follows Cinder and Blacktooth. One is a goblin, and the other is a gunslinging thief attempting to find the one spell that will restore his ability to use magic. There's a strong steampunk aesthetic to the book, mixed with a little of Neil Gaiman's Neverwhere and Dungeons & Dragons. Brett Barkley's artwork is solid, but Jules Rivera's colouring really lifts it to a higher level. This is the sort of book that will be greedily accepted by the readers who like this kind of urban steampunk fantasy. Others may find it a little too generic to bother reading. (3/5)

After his initial six-issue story arc, Brian Wood has been using Rebels to tell a variety of one-shots about people involved in the American Revolution. This fourth 'done-in-one' story focuses on Private Matthew Kilroy, a young man forced to join the Redcoats and travel to the colonies - only to be stuck there fighting for ten years. It's a very abrupt sort of story in this case, and probably could have benefitted from being given an extra issue to showcase more of Kilroy's life. Tristan Jones' artwork is exceptional, however, and ensures the story we do get has a strong impact. (4/5)
Posted by Grant at 7:30 AM