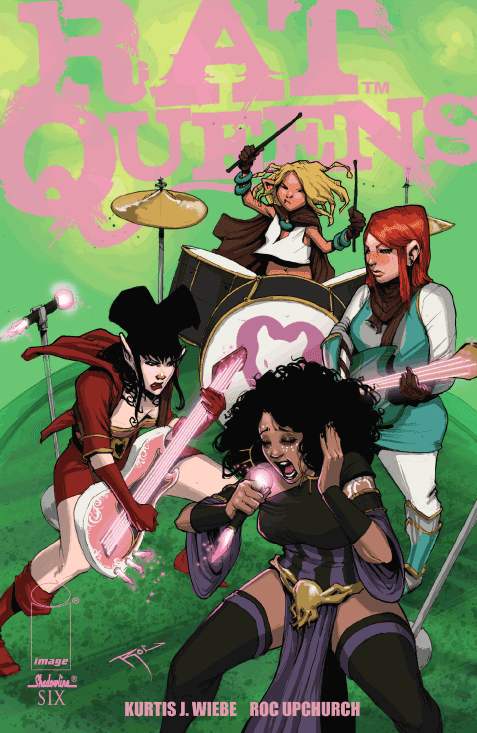 I came to Kurtis J. Weibe and Roc Upchurch's Rat Queens late, bypassing the monthly issues and reading the first five-issue story arc as a trade paperback. Not again. This book is quite frankly too entertaining to wait for, and with its return for a second storyline I've taken the dive and started buying the individual issues.

The book is essentially a Dungeons & Dragons game played by a roller derby team. The team consists of Hannah (an elf rockabilly wizard), Violet (a dwarf fighter/hipster), Betty (the halfling thief and mushroom-eating hippie) and Dee (the human cleric, who's also an atheist). They are foul-mouthed, hard-drinking and generally badly behaved, and they kill monsters for money.

The book's appeal isn't in the plots, however, but in the dialogue and the character. This is a laugh-out-loud funny book, definitely for mature readers (or, at least, immature ones old enough to know better), with great characters and a surprisingly clever undercurrent of depth and feeling. Roc Upchurch's artwork is particularly stunning, with rich and detailed panels expressing remarkable emotion and subtlety. Altogether it's a simply brilliant package: fast, funny, and immensely entertaining. (5/5)

Under the cut: reviews of Action Comics, Aquaman and the Others, Batman Eternal, Batwing, Black Widow, Justice League 3000, Miles Morales: The Ultimate Spider-Man, The Wake and The Woods.

For an instalment of a massive crossover I am not actually reading, this is surprisingly readable and straight-forward. Greg Pak draws Lana Lang further into the loop with a crucial phone conversation with Wonder Woman, while bringing in a whole pile of elements from Grant Morrison's original run on the title. At the same time I'm not happy to see Scott Kolins providing the artwork. He is, as they say, "not ready for prime time", and his comparatively dreadful artwork was one of the things that hurt Legion of Super-Heroes very badly when he was assigned to that book. The colouring masks just how bad the artwork is to some extent, but not enough. It really does drag the book down. (2/5)

Aquaman and the Others #3

This is a solid, no-nonsense superhero book, with Aquaman and his super-team "the Others" fighting against a thousand year-old masked villain who wants his gold Atlantean relics back - the same relics that give the Others their powers. It's a neat idea, one that simultaneously introduces the regular cast in a clear fashion yet still provides a solid story for those of us who have been reading Aquaman for the past three years and already know who all of these people are. Dan Jurgens may not ever hit the peaks of quality for superhero books, but he certainly knows his way around a story. (3/5)

While Carmine Falcone continues his takeover of the Gotham underworld, Batman is away in Hong Kong trying to piece together the reasons why Falcone chose to return. This issue is a nice little team-up with members of Japan's Super Young Team, who are a personal favourite of mine. If I had my way there'd be a monthly ongoing about the Most Excellent Super-Bat purely based on his name alone. Guillem March's art is solid but not really my style: for one thing I hate the way he draws Catwoman, who also appears here. (3/5)

Since the last issue was published DC have finally confirmed what we'd all been waiting for: Batwing ends with August's #34. I've been fascinated by this slow-rolling train wreck since it began. It started with a cool concept (a central African superhero) that simply didn't have a market, and then took the ill-judged move of not only replacing the likeable David Zavimbe with the petulant and unlikeable Luke Fox, but actually gave Luke much more high-tech gadgetry and armour. This basically boiled down to: live in Africa, get cheap and nasty gadgets from Bruce Wayne, live in America, get state-of-the-art toys. It's like DC sat down and deliberately made Bruce Wayne a racist. This issue wraps up the most recent storyline in what feels like a truncated fashion, as well as sets up a showdown between Luke and Bruce over the former's right to be as violent as he wants to be. I'm putting my money on Bruce. (2/5)

This issue acts as a nice character study of Black Widow, while also setting up some plot developments for the future. There's a bit of a mystery in this book regarding where it's taking the character, and what the story is regarding her mysterious ex-Mafia handler, that I'm really enjoying. Phil Noto's artwork just pops off the page too: it's a perfect fit for this more realistic and grounded take on the Marvel Universe. Plus Daredevil pops in for a conversation, which is written brilliantly. This is one of Marvel's best comics at the moment: smart, engaging, featuring a powerful female lead, and beautifully illustrated. I mean, check out that cover! (4/5)

I remember when this series started I was kind of ambivalent: it seemed a bit silly, and stupid, but amusing enough for me to give it a few issues. Now that we're a full story arc in, I can report that this series has improved immeasurably. Many parts are still gut-bustingly funny, but there is a genuinely nasty streak running through this book that I did not expect. Parts of this book feel less like superhero comedy and more like bleak horror. And poor, poor Barry Allen: the Kenny McCormick of the 31st century. (4/5)

I'll say one thing for Bendis: he's remarkably good at getting readers back on-side. I was severely underwhelmed with the first issue of this relaunched (or re-relaunched) Ultimate Spider-Man, and dreaded the implications of its cliffhanger: Peter Parker is back, alive and well. This second issue is a mostly superior effort with great dialogue, strong plot development and typically stunning artwork. The only thing it loses points for is a fairly half-hearted cliffhanger ending, which probably could have been handled a little more effectively. Still and all, this is a pleasant bounce back to form. (4/5)

The penultimate issue of The Wake is all business, as Snyder and Murphy line their elements up in a neat row before the climax next month. It's been a weird series: the first half told a very tight, suspenseful horror story on an underwater research base, whereas the second half has seemed a much messier, meandering quest across a flooded future Earth which started strong but has gradually become unwound. I'm still enjoying it a lot, and it's still a solid read, but I really do hope that the finale pulls everything together more successfully. (3/5)

There's more than a whiff of The Lord of the Flies about this comic, which has deposited a high school of several hundred teenagers (and a few dozen adults) in the middle of a forest on an alien moon orbiting a gas giant. This is the issue where the initial panic is transforming into dread, as the dislocated youths discover more dangerous wildlife, some battle lines start getting drawn between teachers and pupils, and basic necessities such as food, water and sanitation become critical. I'm liking this book a lot: the characters are taking shape nicely, while Michael Dialynas' artwork is expressive and distinctive. (4/5)