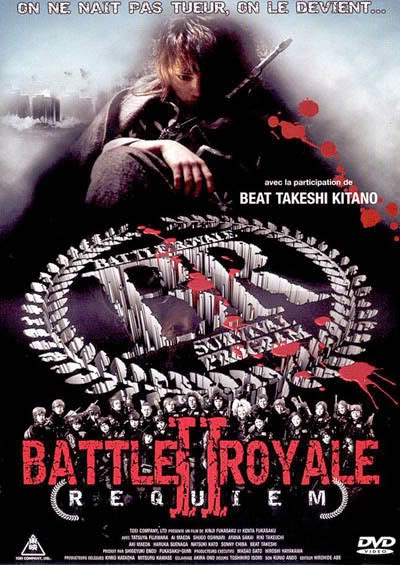 The claims of importance and cultural relevance made for Battle Royale (2000) perhaps does not apply to Battle Royale II: Requiem. It is a 2003 sequel, directed by Kenta Fukasaku, who wrote the screenplay to the original film for his father. Kinji Fukasaku actually started shooting this sequel himself, filming a brief sequence with Takeshi Kitano before he lost his battle with cancer. Kenta took over and brought the film to completion. As a capstone to his father’s works it is oddly appropriate. Kenji’s career was based almost entirely in violent pulp cinema, and violent pulp cinema is pretty much what Requiem provides.

The film begins provocatively, as a sunset-filled vista of downtown Tokyo collapses in a massive terrorist-instigated explosion. Requiem was released in a different world to Battle Royale – the 9/11 attacks came in between the two movies – and Kenta makes damn certain we realise this. It’s bold, but it’s also an empty provocation – it feels like a film attempting to shock rather than a film with something to actually say.

A new film brings a new class of students. This time, instead of being turned on each other the students have been turned en masse against the elusive Shuya Nanahara, survivor of the original film and newly active terrorist against the state. The shift in focus from youth crime and a collapsing social relationship between adults and children towards terrorism should be a bold choice. It takes the sequel another step away from Koushun Takami’s original novel, and instead moves towards Fukasaku’s own particular political vision. This vision is a little hard to take seriously – one gets the feeling that Kenta’s motivations are simply to grab our attention rather than challenge our beliefs. The film is also edited a little too loose for the kind of story it’s telling. Battle Royale had me on the edge of my seat – Requiem often had me on the edge of reaching for the remote.

It’s overwhelmingly strange: the original is important, yet tightly edited and highly entertaining to watch, while the sequel is unimportant, yet bloated with its own sense of portent and social relevance. Replacing Takeshi Kitano’s role in the sequel (despite a brief appearance by Kitano himself) is actor Riki Takeuchi, star of yakuza movie franchises Dead or Alive and Tokyo Mafia. In an odd, off-kilter touch, Takeuchi appears to be playing himself - certainly he shares a name with his character. In his own right he is entertainment, however in the context of the film he’s such an obvious replacement for Takeshi that he suffers by comparison.

Requiem is a nastier film than Battle Royale. It is much bloodier and more violent. Certainly it has a lot of interesting ideas, and if Kenta’s intention was to simply provoke a gut response then some of the bolder images certainly provoke one. It just simply isn’t in the same league. Battle Royale feels like a film that is about something. Requiem simply feels like just another sequel.
Posted by Grant at 4:50 PM