Star Trek: The Next Generation: "Manhunt" 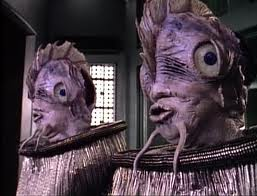 Deanna's mother Lwaxana Troi returns to the starship Enterprise. Part of me really wants to end the review right there, since that's pretty much all you need to know: Majel Barrett is in this episode, mugging to the camera for all that she's worth in a 42-minute string of gags about sexual harrassment. Picard looks rather appalled, and to be honest I know how I feels. I felt harrassed just watching the damn thing.

The Enterprise has been tasked with escorting a pair of fish alien diplomats to Pacifica for negotiations for their species to join the United Federation of Planets. En route they also pick up the ambassador for the planet Betazed, who turns out to be Lwaxana Troi. Lwaxana is undergoing the Betazoid menopause, which for her species means a massive increase in sexual appetite and an unstoppable rampage through the ship to find a romantic partner.

This episode is intended as a broad comedy, and I suppose if bad stereotypes of sexually aggressive middle-aged women are your thing you might crack a smile. To the episode's credit there are a few scenes that do raise a smile. Jonathan Frakes' comic timing is impeccable while Deanna explains the Betazoid menopause to Captain Picard, and certainly his gentle mockery of Picard's predicament helps cement what I've been saying for a few reviews now. The characterisation of the regular cast has been nailed at this point, and they're generally all likeable characters. The episodes are still as uneven and dodgy as hell, but at least I'm engaged by the command crew while wincing at their adventure.

Then there's Majel Barrett in the middle of the episode, stinking up the place like an unfortunate smell. She's not the world's most capable actor, but here she's stuck in a role that's just irritating to watch. The biggest problem is that there's not really a character for her to play, just a bundle of cliches with a face. When J. Michael Straczynski cast her in Babylon 5 as the Centauri Emperor's wife, I was slightly surprised at how good she was. You'd never get a hint of that here. I remember back when The Next Generation was on the air, Barrett was loudly campaigning for Lwaxana to get her own sitcom. I can't imagine for a second why Paramount ignored her...

The fishlike Antedeans are possibly the most ridiculous-looking aliens since the Anticans and the Selay in Season 1 ("Lonely Among Us"). Appropriately enough they were being escorted to Pacifica as well. I'm guessing all the non-ridiculous aliens get escorted straight to Earth. The Antedeans look so silly, in fact, that we even get an entire scene where Wesley tells Worf how stupid and ugly he thinks there are. That's a particularly brave scene, simultaneously pointing out the poor quality of the costumes while making Wesley Crusher out to be something of a bigot. You wouldn't know it due to all the latex, but one of the Antedeans is played by rock star Mick Fleetwood. I guess he was a fan.

There is a nice but brief series of scenes where Picard hides from Lwaxana inside a holodeck simulation of the Dixon Hill crime novels, in a pleasant throwback to "The Big Goodbye". It's not really relevant to the rest of the episode, but at least it's a diversion for the viewer as much as for Picard.

So: we're 19 episodes into the season, with three episodes to go, and eight episodes have been worthwhile. That's a quality ratio of about 42%. My memory has cheated me: I honestly remembered Season 2 being better than this.
Posted by Grant at 10:18 PM