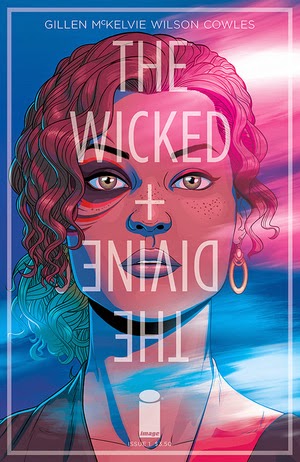 Kieron Gillen and Jamie McKelvie are a simply stunning creative team. They first got my attention with their magical pop music series Phonogram, before making a big splash at Marvel with their deliberately short run on Young Avengers. Now they're launching a new ongoing series at Image: The Wicked + the Divine, and I think it has the potential to be one of 2014's best new comic books.

The series focuses on a series of gods, who are reincarnated once a century into human bodies. Their lives on Earth are brief, lasting only a few short years before they depart in a burst of flame. In the 20th century they arrived during the Jazz age (something we see during a brief but tantalising prologue); in the 21st they live as pop stars. Through the eyes of a young music fan, Laura, we are introduced to a world of celebrity, skepticism, magical powers and assassination attempts. There's a lot squeezed into this first issue, and it's pretty much the sharpest, smartest and most entertaining stuff Gillen has written to date.

Jamie McKelvie is a master of drawing facial expressions and emotions, and like Gillen he comes to Wicked + the Divine at the top of his game. This is a stunning book to look at, from the striking front cover to the beautifully illustrated interiors.

On a purely gut reaction this issue reminded me a lot of The Invisibles, Grant Morrison's epic 1990s Vertigo book - still my favourite comic of all time. The odds are that if you like Morrison's non-superhero work you're going to love this. Image has done it again: they're just releasing hit after hit this year. (5/5)

Batman's race to stop Ra's al Ghul from resurrecting Damian's dead body reaches a temporary climax in the Himalayas. Batman, Frankenstein and a pack of yeti versus Ra's and a small army of mutated humanoid bats for the dead body of Batman's son: if that doesn't get you excited to read this comic, why are you still reading comics? This is a fantastic issue, with high personal stakes, great dynamic artwork by Gleason and Gray, and a left-of-field cliffhanger that's wonderfully silly and bold. This really is the dark horse of DC's New 52: consistently good, always well illustrated, and soaked in heart and emotional depth. Why, given all the cockups of recent years, do I remain such an ardent DC fan? Because of issues like this. (5/5)

The difference in art style between this issue and the last is enough to give the reader whiplash: last week Guillem March was doing his standard thing, and I mentioned I wasn't a big fan of his style. This week Ian Bertram is providing a very different, distinctive, and much more enjoyable look. He's highly reminiscent of Frank Quitely, which means many readers are either going to love or hate it. I loved it. The plot's great too, with Batgirl hunting down a witness to her father's apparent crime through a South American movie studio. There are cameos and guest appearances ahoy in this issue, which made this Bat-fan very happy. My only issue is with the Guillem March cover, which not only doesn't represent the interiors at all but doesn't seem to feature the same costume for the villain either. (4/5)

There's something very slightly off about this book under Marc Andreyko, and to date I haven't managed to quite pin my finger on it. Is it a lack of a narrative drive? A change in character focus? I really can't quite work out what it is - all I know is that month on month by enthusiasm is waning, and I'm not sure how much longer I'm going to care to read Batwoman. Part of my issue is with the way he seems to be distancing Kate from her fiancee Maggie - an ex-girlfriend is introduced this issue. I know this is partly a DC editorial mandate (superheroes can't have happy romantic lives, apparently), but it's not particularly entertaining and is beginning to feel very slightly tiresome. I think maybe DC should have retired this book when Blackman and Williams walked. (2/5)

The first storyline of this relaunched Daredevil wraps up with style, panache and some neat little hooks for future events down the track. In particular he appears to have reinvented the Owl, a classic Daredevil villain of which I know next to nothing. Of course with Waid busy writing a conclusion to this main storyline there's no room left to continue the most intriguing bit of backstory - whatever happened to Foggy Nelson? Chris Samnee's artwork remains a big drawcard. He makes it all look so clear and simple. And bright. The whole Waid/Samnee take on Daredevil is so refreshing in its breezy, light-hearted tone. There's still plenty of room for drama, but after the extraordinarily dark depths to which Brian Michael Bendis and others drove the character, it's a miracle they managed to pull him back into the light at all. (4/5)

A young apprentice is prepared by his master for the rite of passage that will make him a wizard. This is an unashamed high fantasy miniseries that offers few surprises in terms of story or tone, but which dazzles with its elegant turn of phrase and remarkable artwork. As the first part of the series this is almost entirely set-up, but its lyrical tone and heart has completely won me over. In some respects it feels less like a comic and more like an illustrated storybook. It's great to see something this distinctive and special on comic shop shelves: fantasy fans should lap it up. (4/5)

Aspiring magician Ivan search for clues while being pursued by a mysterious hooded figure. He stumbles onto a group of urban explorers who seem less than pleased to meet him. Slowly the mysteries set up by the first issue are getting untangled, however it seems that for every story element that lines up into place there's a new mystery unfolding - particularly the final page revelation that throws the whole series in a new direction. Iumazark's artwork is really impressive, giving the book a depth and an atmosphere that you wouldn't get from more traditional pen-and-ink comic art. As with issue #1, this is also a very handsomely packaged comic book. (4/5)

Talk about a change of direction: when we last saw an issue of Manhattan Projects, the projects were in disarray, the bodycount was rising and the Einstein brothers had shared an edgy reunion. This issue we jump all the way out to deep space, where Russian cosmonaut Laika (yes, the dog) is kidnapped by aliens keen to catalogue and store all of the different species they encounter. It's entertaining, and certainly it's a refreshing change for the series, but it does feel just a little bit superficial. Future issues will likely clear this up, but to Hickman's credit this was not the direction I expected this book to go in. (4/5)

The only thing I have against this book is that it's coming out rather slowly. A months' delay is not uncommon in comic book publishing, but it seems a little worrying to have such a delay between your second and third issue. It's all the more frustrating because this take on the Silver Surfer is really good. Dan Slott was open from the outset that he was basically writing Silver Surfer as the Marvel take on Doctor Who, and it's a comparison that really works. This is smart, exciting and genuinely funny stuff, and Michael Allred's artwork is perfectly matched to the tone of the script. This is the best comic Marvel is publishing at the moment. (5/5)

While there is a present-day plot running through this current storyline, I honestly don't care too much about it: Thor and SHIELD versus the Roxxon Corporation isn't something that really grabbed my attention. The other storyline, however, sees old Thor in the far future making his final stand against Galactus - this time armed with the deadly godkiller blade that featured so heavily in this book's original "Godkiller" arc. It's a jaw-dropping climax, and I maintain my desire for a spin-off monthly about future Thor's three ultra-violent granddaughters. They're awesome. (4/5)

After months of meticulously building up his climax, Brian Azzarello finally starts pushing over dominos, leading to what's shaping up to be a pretty devastating finale. Wonder Woman armoured up, swords held ready, making a final stand against a half-brother who's prepared to utterly destroy everything for his own satisfaction. When this all wraps up, it's hard to imagine this isn't going to be remembered as one of the best Wonder Woman runs ever. This issue even pulls in some older plot threads with a wonderful last page twist that has me desperate to read issue #33. This is stunning stuff: all but impenetrable if you haven't been reading for the last two-and-a-half years, but immensely satisfying for those of us who have. (5/5)