Star Trek: The Next Generation: "Q Who" 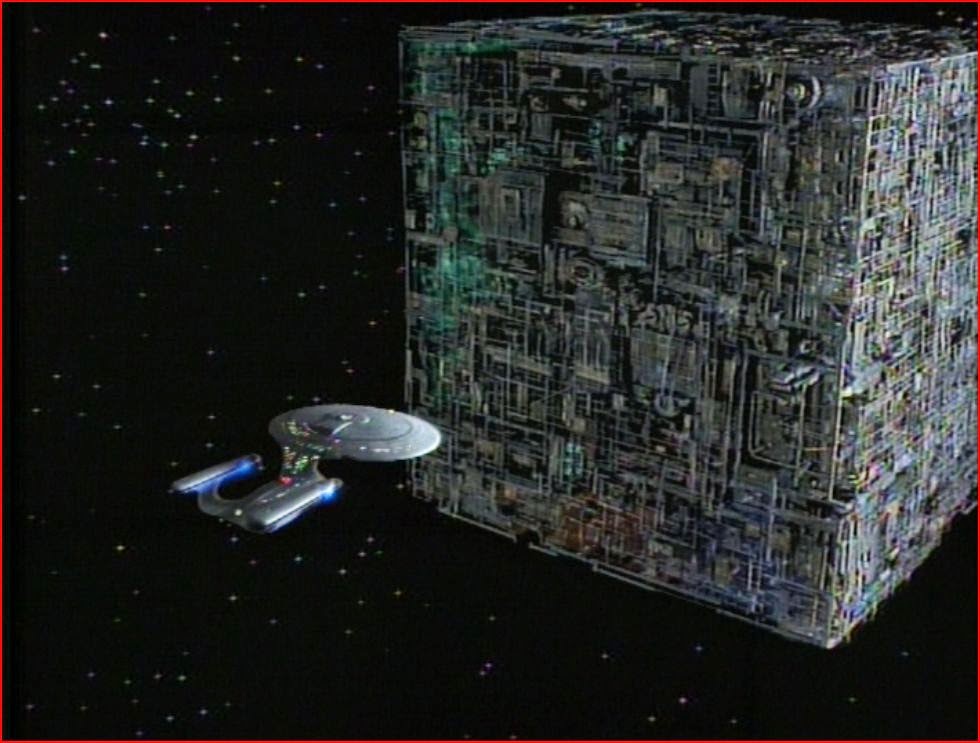 Q (John De Lancie) returns to the Enterprise, requesting permission to join the crew. When Picard turns down Q's offer, Q throws the ship halfway across the galaxy and into the path of the Borg - a mysterious alien species that may be too powerful for the Enterprise to overcome.

"Q Who" is probably the best-known episode from The Next Generation's first two seasons, and for good reason: it heralds the third appearance of Q and it finally introduces what will become the series' most popular set of antagonists. The Borg are overwhelmingly important for The Next Generation, because they're the first new creation for the series that feels like something new. Q is basically a revision of the original Star Trek's Trelane (see "The Squire of Gothos"), and the Ferengi could have easily been presented in one form or another in the 1960s. This isn't the case for the Borg: they're a decidedly 1980s creation, too bleak and horrific for the original series and too heavily embedded in ideas of networked computers and cybernetics to pre-date cyberpunk.

So this, for all intents and purposes, is where The Next Generation grows up: the characterisation and tone may have finally clicked into place some episodes ago, but this is the key to the puzzle.

Of course the Borg were foreshadowed back in "The Neutral Zone", when a string of destroyed colonies were uncovered along the Neutral Zone border. This was supposed to lead into a Borg-centric opener for Season 2, something stopped in its tracks by an industry-wide writers strike. By the time the production team got around to giving them their debut they have been changed extensively - the original idea was for an insectoid species that would strip mine planets like locusts. The revised plan saw them as emotionless cyborgs (hence their name), without a central leader or discernable weak point.

As presented here they are actually rather terrifying: one Borg beams onto the Enterprise and is rapidly shot down by security personnel. A second Borg beams in, calmly takes a few components from its fallen comrade, and simply goes back to the first one's task. There are so many Borg that the loss of a few drones is irrelevant to the greater collective. They adapt frighteningly fast as well: the first might be felled by a Starfleet phaser, but the second already has a personal energy shield that's adapted to protect it.

Once the Enterprise is analysed, the Borg ship (an impressively blunt cube) simply starts using lasers and tractor beams to carve the Enterprise up. 18 people are killed in one strike: for perspective, that's three times the number of Enterprise crew members who have died in the entire series to date. On its initial release this was a profoundly shocking episode: people are suddenly dying in large numbers, the command crew are visibly panicking, and there doesn't actually seem to be a solution.

Even Guinan, who has spent the entire season to date being a calm, wry presence in the ship's bar, is openly predicting that they're all about to die if they don't drop everything and run for their lives. This really is Guinan's best episode to date: she is suddenly given depth and nuance, and appears to be a lot older and more powerful than she had previously seemed to be.

The episode also adds nuance to Q: he has been an irritant to Picard up to this point, but here he actually seems to be giving him a valuable warning. It may cost 18 lives, but at least Starfleet know that the Borg are coming - and come they do, although it will take another season and a half for them to arrive.

One interesting element buried inside this episode is the debut of Ensign Sonia Gomez (Lycia Naff). The character was introduced to give La Forge a regular face to work opposite in Engineering, but despite this intention she only appears one more time in "Samaritan Snare".

This episode is dark, bold and utterly iconic: it's the eighth good episode of the season, out of 16 so far, giving Season 2 a quality ratio of 50%.
Posted by Grant at 4:24 PM