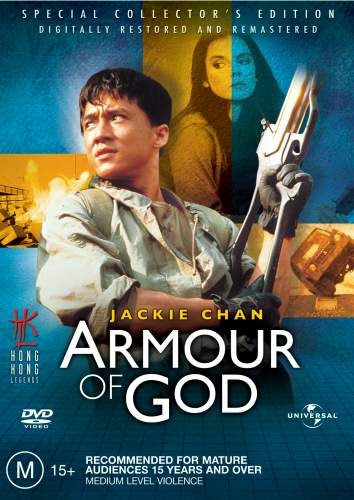 Jackie Chan is a difficult actor to review, or at least many of his films are. For most Hong Kong movie fans he hit his peak in the 1980s, with titles such as Police Story, Project A, Dragon Lord and Armour of God. He’s not just a superb kung fu star, he adds in inventive acrobatics, hair-raising stunts and superb comic timing. I’ve seen his gift for physical comedy compared to Buster Keaton, and it’s not as ridiculous a comparison as it sounds. This is what makes his films difficult to review: it’s hard to look at a man achieve some inhuman feat of acrobatics, and then dismiss his film as poorly made or dull. Nonetheless, I shall try.

I re-watched Armour of God after a period of many years, and many subsequent Jackie Chan films. It has to be said that, despite Chan’s outstanding stunts and amiable on-screen persona, it is sadly a very badly-made film.

Chan plays the “Asian Hawk”, an international antiquities thief who travels the globe stealing archaeological artefacts and selling them at auction. When he steals the sword of the fabled “Armour of God”, a group of European cultists kidnap his ex-girlfriend (Rosamund Kwan) and demand Chan finds the remaining four pieces of the armour.

Most of the acting is fairly shocking, but to be fair to the actors they’re not serviced by a particularly strong screenplay. Tied into that is some odd direction and editing, where all of the non-action scenes are relatively awkward and inept. Put simply: when nobody’s fists are flying, Armour of God is not a good movie. And, to be bluntly honest, there’s precious little action in the film at all.

Action-adventure films like this and Raiders of the Lost Ark – upon which Armour of God draws more than a little inspiration – work best when the audience is given regular little action set pieces between the “talky bits”. The time between the action sequences in Armour of God are simply too long to sustain the attention. By the time Chan starts beating up a castle full of mad terrorist monks, it almost feels like a case of too little too late.

I say almost: truth be told, it’s difficult not to openly smile at Chan’s physical stunt work. He is unparalleled in his ability to fight, to leap around, and to be laugh-out-loud funny at the same time. The last half hour of Armour of God is about an entertaining as any of his 1980s action films. So this is a film that you’re going to watch for the climax. Apart from one brief but entertaining car chase, there’s not too much in the rest of the film to recommend. (Of course it’s worth noting the film’s opening scenes, during which Chan sustained his most life-threatening injury ever – falling from a tree and hitting his head enough to push a splinter of bone into his brain. You even get to see it in the traditional end-of-film bloopers reel, which is uncomfortable to say the least.)

Armour of God broke box office records upon its original Hong Kong release, and is still hailed as something of a classic today. What can I say? The memory cheats. It was followed by a 1991 sequel, Armour of God II: Operation Condor. If you’re in the mood for Jackie Chan comedic action on a Sunday afternoon, then Armour of God may satisfy. If you’re after the best work Chan can do, you will be better served with some of his other films –Drunken Master II, Police Story and Project A to name three.
Posted by Grant at 9:41 AM