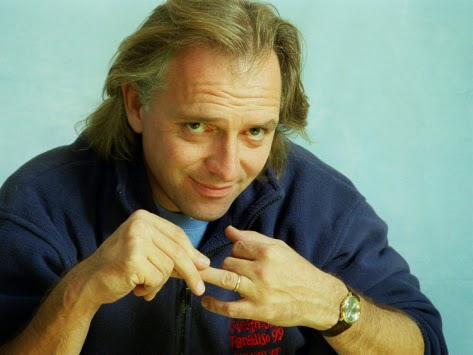 Rik Mayall has died, and I am bereft.

It seems ridiculous to mourn somebody that you have never met. After all, more than 150,000 people die around the world every day. Every one of those deaths is a tragedy in its own way, probably every one of them is deserved of remembrance. And celebrities are, of course, not immune: whenever a famous writer or artist dies I generally note their passing on my Facebook, and I seem to note so many that I now have a reputation for dwelling on the deaths of celebrities.

Mayall's death has hit me hard, though: it's not enough to just note on social media that he's died. This one hurts. His performances and his writing formed a great part of my childhood and adolescence, and even as an adult I have watched his television shows regularly. This past week, while trying to move house with a horrendous headcold, I've been relaxing at night by watching episodes of The New Statesman, his savage late-1980s satire of Conservative politics.

It's not a stretch to claim that Rik Mayall was one of the most significant figures in British television comedy. He and his fellow performers spearheaded the 1980s alternative comedy set who stormed British TV and defined British comedy for a generation. He co-created and co-wrote The Young Ones with Ben Elton and Lise Mayer, and starred in the series as wannabe politico Rick (and Rick was always the best one, no matter what Neil or Vyvian fans tell you). He and Ade Edmondson collaborated on Bottom for three seasons, a movie and a string of stage plays in the 1990s. I happened to be in the UK when Bottom premiered: from the press reaction you'd think there were murdering puppies live on air. Instead they were just kicking and beating a gas inspector to death in what I still claim is the finest moment of physical comedy in British television history.

Even as a guest star he excelled: he made three appearances in classic comedy Blackadder (two as Flasheart, one as Mad Gerald) and he stole the show every time.

In 1991 he made a bit for Hollywood by starring in the comedy Drop Dead Fred: he played a grubby, violent imaginary friend to Phoebe Cates, and was marvellous. The film wasn't a hit, and his Hollywood stardom never came, and that was a shame because I think he deserved it more than a lot of actual Hollywood comedy stars.

To be honest his finest hour is one a lot of his fans don't know about, or don't think about: in 1986 he read out Roald Dahl's childrens novel George's Marvellous Medicine on Jackanory. It was a masterpiece performance: enthused, spirited and gut-bustingly funny. You can track his rendition down on YouTube, and I strongly recommend that you do.

A horrendous quad bike accident in 1998 put a severe dent in his career - he was in a coma for five days, written off for dead after three of them, and his memory and comic timing reportedly never quite recovered. He still performed from time to time - including starring in one final sitcom, Believe Nothing in 2002 - but he was never quite the same funny Rik again.

But yes, I am bereft. And sad. I need something to cheer me up. Thankfully there's this mass of TV comedy I have on DVD that cheers me up every time I'm down: it all stars this guy, Rik Mayall, who's a gift that keeps on giving - even when his own life has been given up.
Posted by Grant at 9:35 AM